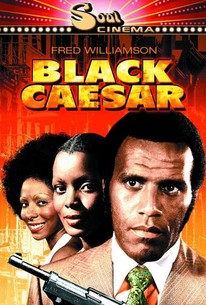 Cult director Larry Cohen (It's Alive) directed this violent blaxploitation film. Nasty racist John McKinney cripples a black shoeshine boy, who grows up to be Tommy Gibbs (Fred Williamson), the Godfather of Harlem. The crimelord now has his tormentor McKinney (Art Lund) in his pocket, based on the cop's mob ties. Tommy's traitorous girlfriend Helen (Gloria Hendry) hands over the evidence, and McKinney moves in for the kill. But he may have underestimated the violent Tommy, who makes him shine his shoes in blackface while singing "Mammy." Rick Baker provided makeup effects, and James Brown did the music for this bloody oddity, followed the same year by Hell Up in Harlem. Cohen and Williamson got together 23 years later for an interesting (if unsuccessful) attempt at reviving the genre, Original Gangstas.

Omer Jeffrey
as Tommy as a Boy

Jeffrey Michael
as Joe As A Boy

Larry Lurin
as Carlos
View All

Unfortunately it all remains too crude to convince one of its better intentions.

Mr. Williamson, in short, can't be blamed for the plot contrivances that hinge mostly on action and bloodshed.

Cohen's technique is almost laughably crude, but a core of frightening conviction remains.

not a political movie per se, but it certainly taps into the raging sense of racial injustice that the Civil Rights Era had not managed to fully eradicate.

"Paid the cost to be the boss," declares James Brown on the soundtrack, and Black Caesar functions as an itemized bill.

a distinctive pastiche of the tough cynical attitudes held by oppressed minorities the world over.

It plays to urban black audiences' fears and fantasies.

Writer-director Larry Cohen's clever and entertaining paean to traditional gangster films (a la Little Caesar) updates the genre to contemporary Harlem and was a major hit with urban audiences.

A funky 70s soundtrack by the Godfather of Soul, James Brown, is by far the best element in this tough blaxploitation gangster saga which was written and directed by erratic talent Larry Cohen.

I have yet to see Edward G. Robinson in Little Caesar, but after reading about that movie and other gangster films in the book We're in the Money: Depression American and Its Films, I can see where this pic gets its rise and fall storyline, its style, and its title.The acting is fairly solid. The low budget is evident occasionally, but not too often. I liked the family drama involved. The fact that this gangster Tommy Gibbs (Williamson) has a mother and father who seem like real people and who appear in more than one throw-away scene was a pleasant surprise. The fact that Tommy stumbles around after being shot for as long as he does was too ridiculous.

This is inextricably linked to the blaxploitation era that it came out during, and it does fit into that area, but I feel like calling this a a blaxploitation film devalues it, or gives people the wrong ideas about it. This actually owes a lot more to the gangster pictures of the 1930s and 1940s which makes a lot of sense since this is apparently a black remake of Little Caesar. Even if it wasn't a remake, the influence is still quite valid thanks to the story structure and content. This isn't the typical cheesy black action movie like its contemporaries, but it is still a blak crime film, so that's why it is still slightly appropriate to lump it in as blaxploitation. It's on the higher end of that scale, but it's not a heavy intellectual piece either. But it is lots of fun, very entertaining, and quite well made. The camera work is good, the chase through midtown is fun and nicely executed, and it's just a hard film to dislike. Fred Williamson gives a strong lead performance in a variation of the rags to riches story. The story beats are familiar, but not completely conventional (a few flourishes prevent this). The rest of the cast is good too, but none of them are quite as good as Fred. James Brown's score is lots of fun and fits the film well, even though it's not one of his best, or one of the best soundtracks from the era. It's still pretty decent though. Give this one a chance. It's pretty good. My only real complaint is that it could have had a bit more substance or subtext. Then I could justify giving it the extra half star it feels like it was shooting for. There is one great scene towards the end that has some strong substance, and there are some other places throughout, but mostly it's a case of the film having a lot of great ideas and stuff, but not much of it is fully fleshed out or expanded upon.

This film is great. Immortalised by Public Enemy, Big Daddy Kane and Ice Cube on "Burn Hollywood, Burn" from the Fear Of A Black Planet LP, as soon as I heard Driving Miss Daisy being rejected for Black Caesar (listen to the track, you'll understand) I knew that I had to see this film. After all, if it's good for three of my favourite rap artists then it's good enough for me, right? So I saw a copy in Bedford while I was doing my teacher training course, and me and my mate Jai went back to the place we were staying at and watched it. I was spellbound - it is one of the best Black aimed films that I own! (I don't like the term 'Blaxploitation'. Have you noticed that there doesn't seem to be an official 'Whitesploitation' genre?) OOH ARR BOOOYEEEE, SPOILERS BEEEEELOW. Anyway, for those that are interested in a review of the film rather than my personal beliefs, the film concerns Tommy Gibbs, a Black gangster who gets a job for the local Mob after a nifty killing in a barber shop. (This comes after an excellent beginning that sees him assist in the murder of a gangster in the middle of a crowded street.) It charts his rise and fall... much in the manner of Scarface (either version). As Larry Cohen says in his DVD commentary, it's more of a Black version of the old 1940s gangster films than it is a straight up exploitation piece like Slaughter or Black Gunn. I won't go into much detail as I urge you all to watch it, but I might add a couple of trivial points: you should watch it back to back with the sequel - Hell Up In Harlem. If you do, though, bear in mind that the print that survives has a substantially different ending. I say no more. Watch this film - it is truly a classic.

Fred Williamson is one of the best actors of the Blaxploitation era, and his performance here is on par with his other work. As a spin-off film, taking previously made plots and story hooks, and incorporating all-black casts for marketability, the film is a success, drawing nicely on mob and crime films of the era. As anything but Blaxploitation, the film adds nothing new to the easily-executed crime genre. Standard and forgettable when taken out of its niche.