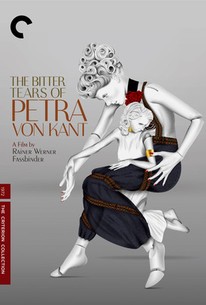 This tale of intermingled love and hate is directed by Rainer Werner Fassbinder, and is the 13th of the 33 films he made in his short life. It explores the universal dynamics present in close human relationships, even lesbian ones. Petra Von Kant (Margit Carstensen) is a fashion designer. Some time ago, she divorced the husband she no longer loved. Until recently, she has been in a fairly satisfactory S & M relationship with her assistant. When she develops an obsession with her fashion model, however, things become far more complicated. ~ Clarke Fountain, Rovi

The set and costume design and the hothouse atmosphere represent so much high-camp gloss; but once again this careful stylisation enables Fassbinder to balance between parody of an emotional stance and intense commitment to it.

Even those who love pain will be frustrated by The Bitter Tears of Petra von Kant.

The best movie on role playing, power, and human suffering that I have seen in a long time.

Fassbinder's style, perfectly shown in this film, is based on a well constructed script in which the splendid dialogue stands out. [Full Review in Spanish]

Like so many films these days, this one turns out to be more interesting when you get away and think about it.

[VIDEO ESSAY] Brecht meets Douglas Sirk and Joseph Mankiewicz ("All About Eve") in Rainer Werner Fassbinder's delectable adaptation of his five-act stageplay, a lesbian triangle of role- switching polarities between dominance and submission.

Handsome with a touch of aloofness... it's a quintessentially Fassbinder portrait of doomed love, jealousy, and social taboos, bouncing between catty melodrama and naked emotional need.

On one level, it is an engrossing character study about changing power dynamics in relationships. On another, it's simply a marvel of fluid, focused filmmaking - where everything in the frame is loaded with meaning.

You can understand why (Petra Von Kant) is viewed by many as one of Fassbinder's masterpieces. Not bad for ten days' work, anyway.

A frigid hothouse in four acts and one epilogue, the equal of the best of Losey or Duras

A very sharp, thought-provoking and also superbly directed story conceived within a perfect 4-act-and-an-epilogue structure and having only a room as stage to depict the degrading vices of relationships, like manipulation, self-humiliation and power games.

My second Fassbinder film, "The Bitter Tears of Petra von Kant" has caught me off-guard on how insightful its screenplay really is in terms of examining the painful nuances of love. Mounted by Fassbinder as something akin to a theatrical play (it was, after all, made to be one), the film chronicles, in an almost real-time fashion, the emotional complexities of a certain Petra von Kant (played by Margit Carstensen with an otherworldly sense of controlled lunacy), a renowned yet romantically jaded fashion designer who, after an unsuccessful marriage with a certain Frank, has decided to lead a loveless life. That is, until she meets an aspiring fashion model named Karin (Hanna Schygulla), a young woman who will simultaneously prove to be the best and worst thing to ever come to her life. Although Karin states that she indeed likes Petra, she can never say that she loves her with a straight face and with a full, unhindered conviction. Is she only drawn to Petra because of her fame and because of her money? Is she just fascinated by Petra's manipulative character? Or is it something more humanly unexplainable? Rainer Werner Fassbinder, a most emotionally articulate auteur in the tradition of John Cassavetes, seems unsure himself, but so are the characters. After all, the film's focus is not on the spark that has ignited such a romance but on the tearful aftermath of such a heavily conditional affair. Set entirely in a small but evidently lush apartment space, the film then explores, using long shots, deep focus and slow tracking shots, Petra's metamorphosis from a relatively sane yet possessive woman to a terribly lovesick sap who's just inches away from utter romantic lunacy. Fassbinder, through his powerfully amoral and emotionally insular screenplay (which he has written while he's on a 12-hour flight from Berlin to Los Angeles), has created an aura of detachment between the characters that populate the film and the audience, which makes for a more compelling viewing as we ourselves question the very reason as to why we stay on to watch such a cold, manipulative woman cry her hearts out for 2 hours. The answer for that, ironically enough, resides in the film's most crucial character bar Petra von Kant herself: Marlene (Irm Hermann), Petra's secretary and co-designer who sees in Petra an untamed dominatrix who she is more than willing to masochistically submit to. In a way, because of Rainer Werner Fassbinder's deceptively simple scenario and intelligent but admittedly self-destructive ruminations on love, we, the audience, were able to channel Marlene's unconditional subservience to Petra, and we are fascinated by it. But at the same time, we (or I am, at least) are also equally fascinated by our inclination to watch the Petra character unravel in front of our very eyes. Sure, we are abhorred by Petra's whiskey-a-minute behavior, telephone-centric existence and her constant bossiness towards Marlene the silent slave, but we just can't look away. Thanks to Fassbinder's subtle yet incisive portrayal of a lovesick woman who, at the same time, is also quite sick of love, our inclination and affinity to witness the film's developments and emotional devolution transcends that of a typical film viewer. Instead, we are drawn into Fassbinder's simplistic approach that's as melancholic as it is full of sound and fury simply because it speaks some truth. For a film that is composed mainly of painfully long shots and is set entirely in one location, "The Bitter Tears of Petra von Kant" may prove to be a very challenging piece of work to sit through. But honestly speaking, I never felt the 2-hour running time simply because I was very engrossed on anticipating how Petra may ultimately turn out to be. Sure, she is such an alienating character in the fashion of all those 'rich and ruthless' film characters out there, but deep inside, her emotionally devastated heart is a core that we can all identify with. Love is a real bitch, you know, and Fassbinder (and each and every one of us) knows that. A quote from him: "Whether the state exploits patriotism, or whether in a couple relationship, one partner destroys the other." There was a theory on a great IMDb discussion thread that I have read which states that Petra and Marlene, figuratively and essentially, are one and the same, and that (SPOILERS) Marlene leaving Petra in the end is the symbol of their emotional deliverance, and is therefore adhered to the 'Stoicist' philosophical school of thought ("to be free from anger, envy, and jealousy"); an existential framework which is also specifically applicable in the context of the interpersonal relationship between Petra the master and Marlene the mastered (to accept even slaves and those that are considered inferior as "equals of other men, because all men alike are products of nature"). Although a film that is admittedly not everyone's cup of tea, "The Bitter Tears of Petra von Kant" is a very rewarding piece of cinema. It may not give out the most concise feelings and the most reassuring of answers, but hell, isn't that what great films are all about?

"The Bitter Tears of Petra Von Kant" may be dull, but it's a tribute to director R.W. Fassbinder's mise en scene that it's not even duller. With just six actresses exchanging stilted dialogue on a single set for over two hours, this is not a movie for popcorn-munchers. The opening credits are layered over a shot of two cats dawdling on a dim stairway. From there, the camera rolls into a bedroom. And stays there. Until the film is over. Luckily, the room has quite a few arresting features, including a 17th-century mural reproduced on the wall, an eerie assortment of nude mannequins and white, fluffy carpet that looks like dog hair. And then there are the costumes. The title character shifts through several wild dresses, robes and wigs (one revealing, pearls-draped outfit almost defies description), and the supporting players are decked in purple, metallic gold, lemon-yellow and more. Fur and feather trim: everywhere. Petra Von Kant (Margit Carstensen) is a successful fashion designer and the soggy epitome of a mean drunk. She lives with another designer named Marlene (Irm Hermann). Marlene waits on Petra like a servant, never says a word (her eyes speak volumes) and seems to be on the losing end of a dominant/submissive relationship gone stale. Petra's cousin, mother and daughter serve as secondary foils, but her most crucial nemesis is Karin (the effortlessly sexy Hanna Schygulla), a young, fickle model who becomes Petra's lover during the course of the film. Clearly, Marlene is not pleased. The story does not advance much further than this -- the remaining plot developments barely require two sentences to describe. And in case the lesbian theme excites you, be forewarned that your fantasies will go ungratified. Instead, the action mostly dwells on the self-loathing Petra firing abuse at her visitors and phone-callers. Carstensen carries the film on her bony shoulders and does give a remarkable performance, but the tensions between her and her coterie won't be enough to keep most viewers engaged.

It's incredible how Fassbinder was able to expertly use one single set and frame it in all ways possible to please his deliciously black humour in order to tell this masochistic story of an obsessive fashion designer and her women.