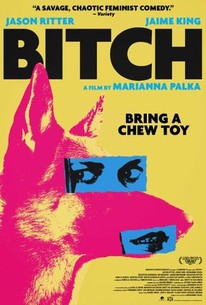 Critics Consensus: Bitch has an intriguing premise and a strong start that hints at greater things for writer-director-star Marianna Palka, even if its reach ultimately exceeds its grasp.

Critics Consensus: Bitch has an intriguing premise and a strong start that hints at greater things for writer-director-star Marianna Palka, even if its reach ultimately exceeds its grasp.

Critic Consensus: Bitch has an intriguing premise and a strong start that hints at greater things for writer-director-star Marianna Palka, even if its reach ultimately exceeds its grasp.

BITCH tells the powerful and darkly humorous story of a housewife who, after her philandering husband and unruly kids break her psyche, upends the family dynamic by assuming the persona of a vicious dog.

New On DVD in January: Better Call Saul, IT, Blade Runner 2049 and More
Murder on the Orient Express Mostly Stays on Track

The father is unsympathetic, the kids are uninteresting, and the sister-in-law is unnecessary, so the mother's absence from her own story becomes glaring.

[Palka's] come up with an intriguing premise, but doesn't quite have the nuance or the storytelling chops to offer an insightful satire.

A satirical scream of rage against patriarchal prerogatives, this feminist horror-comedy, written and directed by Ms. Palka, has a vicious edge that can stifle your laughter.

While it's refreshing to see a portrait of a woman's unraveling that doesn't romanticize mental illness, and that's actually directed by a woman, it's easy to wish Bitch probed a bit deeper into the protagonist's pre-dog life.

An intriguing premise becomes a bit of a dog's dinner in Marianna Palka's dark indie parable.

It's an interesting concept, but the characters are thin and nothing here feels insightful.

It's a deeply personal, intimate piece of storytelling that holds within it dark, uncomfortable humor and pain.

The way the story is built and acted is fantastic and connects with the audience in way that slowly builds throughout the film.

...a premise that sounds like a particularly shitty '90s comedy is mined for challenging social commentary.

Bitch is an attempt to make a feminist statement that is just as punchy and provocative as its title. However, the central gimmick tires about thirty minutes into the feature...

Forget the stresses of being a mother and a wife: simply being a woman is a full time job that will drive you crazy.

Bitch has a great, attention-grabbing premise but as a satirical feminist parable it ends up too extreme for its own good.