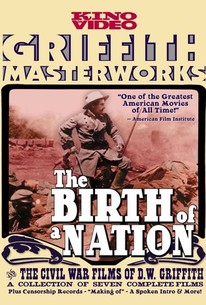 Critics Consensus: Racial depictions aside, The Birth of a Nation is a landmark film whose achievements and pioneering techniques remain fully relevant today.

Critics Consensus: Racial depictions aside, The Birth of a Nation is a landmark film whose achievements and pioneering techniques remain fully relevant today.

Critic Consensus: Racial depictions aside, The Birth of a Nation is a landmark film whose achievements and pioneering techniques remain fully relevant today.

The Birth of a Nation Photos

The most successful and artistically advanced film of its time, The Birth of a Nation has also sparked protests, riots, and divisiveness since its first release. The film tells the story of the Civil War and its aftermath, as seen through the eyes of two families. The Stonemans hail from the North, the Camerons from the South. When war breaks out, the Stonemans cast their lot with the Union, while the Camerons are loyal to Dixie. After the war, Ben Cameron (Henry B. Walthall), distressed that his beloved south is now under the rule of blacks and carpetbaggers, organizes several like-minded Southerners into a secret vigilante group called the Ku Klux Klan. When Cameron's beloved younger sister Flora (Mae Marsh) leaps to her death rather than surrender to the lustful advances of renegade slave Gus (Walter Long), the Klan wages war on the new Northern-inspired government and ultimately restores "order" to the South. In the original prints, Griffith suggested that the black population be shipped to Liberia, citing Abraham Lincoln as the inspiration for this ethnic cleansing. Showings of Birth of a Nation were picketed and boycotted from the start, and as recently as 1995, Turner Classic Movies cancelled a showing of a restored print in the wake of the racial tensions around the O.J. Simpson trial verdict. ~ Hal Erickson, Rovi

Wallace Reid
as Jeff the blacksmith

Erich von Stroheim
as Man who falls from Roof

Violet Wilkey
as Flora as a child

William Freeman
as Sentry
View All

News & Interviews for The Birth of a Nation

Who’s Ready for Some 3D "Harry Potter"?
SUNDANCE: A Filmmaker Makes His Pitch

View All The Birth of a Nation News

Critic Reviews for The Birth of a Nation

Problematically, Birth of a Nation wasn't just a seminal commercial spectacle but also a decisively original work of art -- in effect, the founding work of cinematic realism, albeit a work that was developed to pass lies off as reality.

The quasi-Victorian Griffith was in so many respects way ahead of his time even if his philosophy and mind-set could often be said to be behind it.

Birth of a Nation is a great epoch in picture making; it's great for pictures and it's great for the name and fame of David Wark Griffith. When a man like Griffith in a new field can do what he has done, he may as well be hailed while he is living.

Griffith's later films are unquestionably superior. But here, in a very real sense, is where the movies began, both as an art and as a business.

The biggest challenge the film provided for its audiences is perhaps to decide when 'ground-breaking, dedicated, serious cinematic art' must be reviled as politically reprehensible.

D.W. Griffith made many other films with old-fashioned, sentimental storylines -- but his best work moves the audience, because it is based on an emotional truth. That emotional truth is missing in this film.

A film that deserves, no demands, to be acknowledged, if for no other reason than to come to terms with the racist history it represents.

While it's clear that D.W. Griffith's The Birth Of A Nation is a seminal work of narrative filmmaking and will forever live in infamy as a result (being seen by new eyes generation after generation) that doesn't mean one can't wish it were never made.

D.W. Griffith's The Birth of a Nation is as much a part of film history as the Civil War is a part of American history.

A towering milestone in the history of cinema. Asentimentalised, reactionary slab of racism. Can a film be both? In the case of D.W. Griffith's silent-era classic The Birth Of A Nation, unfortunately it can.

Audience Reviews for The Birth of a Nation

It was definitely innovative in many ways when it came out and still delivers a timeless anti-war message, but it is nearly impossible to read "the helpless white minority" and not feel outraged by the film's odious racism as it vilifies black people and glorifies the Ku Klux Klan.

Considering the age and the state of film making when this was made this is an awesome achievement. However it is so wildly and insultingly racist, and its rewriting of history so blatant, that those aspects diminish its overall worth a great deal. Still from a technical viewpoint its dazzling.

Ignore the five star rating I gave to "The Birth of a Nation" and let's not even discuss it, for ratings are wholly irrelevant in the context of this film. A culmination of all knowledge gained during the silent film era, this D. W. Griffith landmark is as much part of American history as the Civil War, and its impact on our society as well as American cinema cannot be overstated. The camera and storytelling techniques pioneered in the making of "Nation" have influenced nearly every film that came after it, and modern cinema owes a great debt to the director for his unwavering vision and talent. However, I cannot say that I enjoyed the film, as "Nation" is clearly a direct reflection of the director's deeply racist opinions, and is simply put a morally reprehensible affair. Nevertheless, it is permanent blemish in the pages of our American history, and it must be confronted; discussion and reflection are the preferred methods, not blissful ignorance.

Who needs Adolf Hitler when you've got D.W. Griffith? After 20 odd years of suspicious curiosity, I finally put three hours aside to watch America's very own Nazi propaganda film, "The Birth of a Nation." It is sickening to hear this piece of filth described as a touchstone of American cinema. The story is told in two parts: The Civil War and Reconstruction. In the first part, the movie sides with the South, but it doesn't demonize the North. In fact, President Lincoln is presented in a rather rosy hue. His murder, which is staged in the movie, is presented as a tragedy. But in the second part, the agents of Reconstruction are demonized the way the Nazis portrayed Jews. Black men are portrayed as "crazed negroes" (to quote a term used on one of the title cards) and lust-mad rapists terrorizing white women and girls. In one of about 100 jaw-droppingly disgusting sequences, a black man is depicted as chasing a white teenage girl through the woods. The terrified girl throws herself off a cliff rather than allow herself to be captured and raped by the man. Griffith actually films the girl plummeting to her death, her body slamming into the rocks below, just for maximum effect. Lillian Gish plays one of the major characters, a woman who must be rescued by the Klan when a mixed-race political leader kidnaps her, attempting to force her to marry him. The central message of the film is to celebrate the formation of Ku Klux Klan and the return of black Americans to second-class status after the brief period of Reconstruction. In one of the final scenes, a line of Klansmen on horseback stands outside a polling place, preventing black men from entering. This is presented as a good thing, keeping black men from voting. Part of me thinks that all copies of this film should be destroyed just as a purification ritual. But another part believes the film should be seen, if only to expose how much sickness there was in American society in the early 20th century. America likes to think of itself as largely responsible for ridding the world of Nazism. But a substantial portion of the white men and women in the U.S. Armed Forces during World War 2 had a Nazi mentality themselves. If they were German, they would have loved Hitler. Let's not forget that "Birth of a Nation" was a gigantic hit. It not only played throughout 1915, it was also revived in most areas of the country (not just the South) annually for special return engagements. White America loved "Birth" more than any other movie of its time. It was their "Wizard of Oz," to be watched over and over. I will never look at D.W. Griffith the same way again. In my view, he should be described as America's very own Hitler.

The Birth of a Nation Quotes