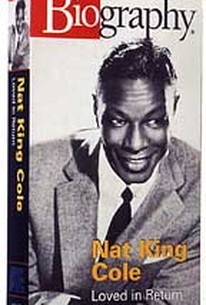 Part of the Biography television series from A&E, this documentary reviews the career and personal life of singer Nat King Cole. Nat took to the piano and could play anything from Bach to Rachmaninoff by the time he was a teenager. In 1937, he debuted his soon-to-be-famous breathy singing style. His first national hit, was {"&Straighten Up and Fly Right"}. In the 1940s, the King Cole Trio was in high demand, ruling the airwaves with hits like "Get Your Kicks on Route 66," "The Christmas Song," and "Nature Boy." Cole's 1949 recording of "Mona Lisa" crossed over into the pop charts and sold over three million copies, making him the most successful African-American recording artist of his time. Although Cole's commercial success as a pop artist was phenomenal, it unfortunately came with the sacrifice of his exemplary and extremely influential talents as a jazz pianist. Before he turned full-time to singing, he had already influenced the likes of Oscar Peterson, Ahmad Jamal, and Ray Charles with his intricate and innovative piano style and piano/guitar/bass lineup. Includes interviews with Cole's widow, collegues, and his daughter, singer Natalie Cole. ~ John Patrick Sheehan, Rovi

There are no critic reviews yet for Biography: Nat King Cole - Loved in Return. Keep checking Rotten Tomatoes for updates!

There are no featured reviews for Biography: Nat King Cole - Loved in Return at this time.