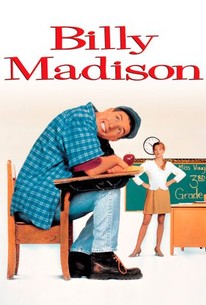 Critics Consensus: Audiences who enjoy Adam Sandler's belligerent comic energy may find him in joyously obnoxious form as Billy Madison, but this thinly-plotted starring vehicle surrounds its star with an aggressively pedestrian movie.

Critics Consensus: Audiences who enjoy Adam Sandler's belligerent comic energy may find him in joyously obnoxious form as Billy Madison, but this thinly-plotted starring vehicle surrounds its star with an aggressively pedestrian movie.

Critic Consensus: Audiences who enjoy Adam Sandler's belligerent comic energy may find him in joyously obnoxious form as Billy Madison, but this thinly-plotted starring vehicle surrounds its star with an aggressively pedestrian movie.

Master of infantilism Adam Sandler stars as the title character, an overgrown rich kid who wiles away his days poolside, swilling kegs of beer and appreciating fine nudie magazines such as "Drunk Chicks" -- that is, until his father (Darren McGavin) decides to test his mettle as future head of the family business by posing a challenge: retake and pass grades K-12 in 24 weeks or watch control of the business pass to the requisite conniving underling (Bradley Whitford). Forced into action, Billy vows to change his drunken ways. He enrolls in kindergarten, makes new friends, pelts pint-sized kids with playground balls and develops a love interest in a pretty teacher (Bridgitte Wilson). The action culminates in an academic showdown between Billy and the purportedly Harvard-educated underling for the future of the family enterprise -- no small feat for a man fresh out of the first grade. There's gross, moronic, off-color low humor galore in Billy Madison, particularly in one subplot involving a romantically forward elementary school principal (Josh Mostel, son of theater great Zero Mostel) and his secret former life as a professional wrestler; another scene includes the hypertense school bus driver (Chris Farley, in a typical over-the-top cameo) lying in the meadow with a hallucinatory penguin. As one might suspect, Billy Madison is not for every taste; Sandler fans will laugh from start to finish; others beware. ~ Jeremy Beday, Rovi

Christopher Kelk
as Rollo the janitor

If you've ever had a yen to relive the third grade, this must be the next best thing.

Billy Madison is a textbook example of a half-decent idea that never got developed beyond the "lying around drinking beer and making jokes with your buddy" stage.

The latest entry in the American cinema's investigation of dumb-and-dumber heroes.

Even on its own dim-bulb terms, this runt of a comedy never locates its central joke: Is it that Billy the child-man doofus doesn't fit in with his pint-size peers or that he fits in all too well?

Those unfamiliar with Sandler's antics may...begin to find him annoying sometime between the appearance of the Universal logo and the end of the opening credits.

A more moronic vehicle is hard to imagine.

The tepid moments far outnumber the truly wacky ones, and in the end Billy Madison earns a trip to comedy detention.

While not in the same league as The Wedding Singer, it's still enjoyably dumb fun, especially for Sandler fans.

Where Dumb And Dumber was clever enough to play dumb to amuse the child in all of us, this suffers under the illusion that just having a central character blissfully unaware of the need for a brain is actually a funny concept.

Even with all the circuslike parties that celebrate our student prince's getting through yet another grade, Billy Madison barely merits passing marks.

This is Adam Sandler at his best, and his latest films are cheap grabs at what once came so easily to him.

Though its jokes are of stupidity and grade-school humor, Billy Madison is a decent comedy from the creation of Adam Sandler. The film is immature and has memorable quotes/scenes that die-hard Sandler fans will remember. 4/5

Childish and immature - but then again, what Sandler comedy isn't? I've seen better by him, like Click and Happy Gilmore, but I've also seen a lot worse like Grown Ups and The Waterboy. As long as you can cope with its stupidity, it's pretty fun and enjoyable. Nothing that will make it into my film collection, but not a bad way to spend the evening. Worth seeing just for the hilarious cameo by Steve Buscemi.

[img]http://images.rottentomatoes.com/images/user/icons/icon13.gif[/img] One of the earliest Adam Sandler comedy vehicles is the highly over rated Billy Madison. To put it simple, it's a childish comedy with the occasional morsel of charm and a few good laughs. It's at best, mildly amusing because the film gets sillier at every turn rather than getting any funnier. I prefer Happy Gilmore because the character suited Sandler better and the film itself was a little less moronic, smarter, had a lot of memorable scenes and was more ambitious. Billy Madison at times, because of it's stupidity, is just uncomfortable to watch.

I was okay, not great, but preatty funny, Sandler was kind of annoying too.