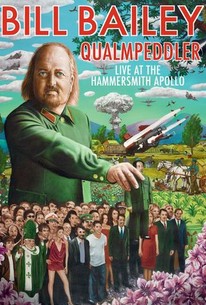 Rapturously received throughout Australia, New Zealand and the UK, Bill recorded this terrific new show at his local, the Hammersmith Apollo. Furious and hilarious - Qualmpeddlar takes on the coalition, popular culture, social media, celebrity and cheap shark-diving. No show of Bill's though, is complete without musical wizardry, and there is casual brilliance in the religious dubstep, German folk-metal, a Bible guitar, the Match of the Day theme as Jewish folk clapalong, and a show-stopping reggae version of Downton Abbey. Plus there's an extraordinary tale of a rescued owl. Qualmpeddler is classic Bill Bailey.

There are no critic reviews yet for Bill Bailey: Qualmpeddler. Keep checking Rotten Tomatoes for updates!

There are no featured reviews for Bill Bailey: Qualmpeddler at this time.