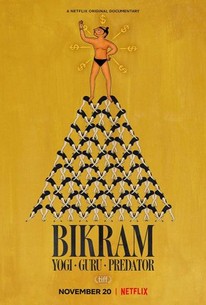 Critics Consensus: By exposing the corrupt systems which enabled him, Bikram: Yogi, Guru, Predator paints a disturbing -- and necessary -- portrait of the cycles of abuse endured by countless followers of the charlatan at its center.

Critics Consensus: By exposing the corrupt systems which enabled him, Bikram: Yogi, Guru, Predator paints a disturbing -- and necessary -- portrait of the cycles of abuse endured by countless followers of the charlatan at its center.

Critic Consensus: By exposing the corrupt systems which enabled him, Bikram: Yogi, Guru, Predator paints a disturbing -- and necessary -- portrait of the cycles of abuse endured by countless followers of the charlatan at its center.

BIKRAM: YOGI, GURU, PREDATOR examines the dramatic rise and fall of the controversial founder of hot yoga, Bikram Choudhury. Arriving in Beverly Hills from Calcutta, India in the early 1970s, Choudhury quickly cultivated a celebrity following and built a global fitness empire that furnished him with extreme wealth. But by the 2010s, as numerous sexual abuse allegations emerged and stories of his aggressive, cult-like training environment surfaced, the lawsuits started to mount and Choudhury's unorthodox teaching style became front-page news. Directed by Academy Award (R) winner Eva Orner (Taxi to the Dark Side, Chasing Asylum) and produced by Sarah Anthony (The Price of Free, The Defiant Ones), BIKRAM: YOGI, GURU, PREDATOR, a Netflix original documentary, shines a light on the stories of the women who took him down and explores the contradiction of how this healing discipline could simultaneously help and hurt so many.

It provided a bog-standard portrait of yet another sweaty tyrant, reinforcing the one rule of life: never trust anyone who likes Rolls-Royces.

The content is unforgettable, a reminder to question those in positions of power, even ones who seem only to want to help you.

It's plain, straightforward and feels like one long news report with lots of factual reporting. At some point there is bigger, deeper work to be done on the appeal of the coiled, angry masculinity of Choudhury.

Over the course of 90 minutes, Bikram: Yogi, Guru, Predator successfully separates the man from the myth and reveals a monster.

This haunting documentary is a powerful addition to a growing body of post #MeToo films... that show how cultural power is accumulated and weaponized.

Even though Choudhury's crimes are a matter of record, Yogi, Guru, Predator is very damning.

Speaks to the various ways that individual and legal cowardice, misogyny and self-interest help perpetuate such misconduct; which, in the end, makes [it] not only an eye-opening account of Bikram's wretchedness, but a vital act of speaking truth to power.

Big Yoga is having its reckoning moment. And the Bikram documentary is the capstone.

Bikram: Yogi, Guru, Predator takes a single-minded approach, only interested in exposing the moral and legal transgressions of the subject, and the case is beyond convincing.

The documentary isn't interested in differentiating sinners from saints, presenting the conflicted feelings of Bikram's victims alongside those who remain devoted fans.

There are no featured reviews for Bikram: Yogi, Guru, Predator at this time.