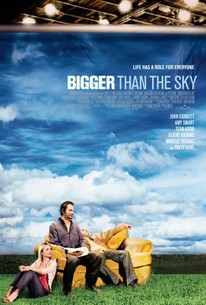 Bigger Than the Sky Photos

A regular guy adds some much-needed drama to his life in this comedy. Peter Rooker (Marcus Thomas) is a man who has come to a crossroads in his life -- he's just been given his walking papers by his girlfriend, has lost interest in his job, and is looking for something new in his life. Filled with ennui, one evening Peter walks into a small theater where a community drama company is holding auditions for a production of +Cyrano de Bergerac. While Peter has no acting experience and stumbles through his impromptu audition, director Edwina (Clare Higgins) thinks there's a great Cyrano lurking inside him, and gives him the title role. Before long, Peter has gained a new circle of friends, dominated by eccentric small-time actors Michael (John Corbett) and Grace (Amy Smart), who are playing Christian and Roxanne, and a new enthusiasm for life. But as it happens, both Peter and Michael have become infatuated with Grace, and as Peter tries to find a way to win her attention, Edwina begins to wonder if casting Peter was such a good idea after all. Bigger Than the Sky was the first dramatic feature from actor-turned-director Al Corley.

Matt Salinger
as Mal
View All

Critic Reviews for Bigger Than the Sky

An off-putting combination of earnestness and apparent disregard for audience involvement.

Bigger lopes along endlessly, a no-surprises foray into backstage high jinks and the notion of life as the best acting coach there is.

Nearly two hours of an earnest, predictable comedy about a pathetic schlemiel who hopes to redeem himself by acting in the community theater.

Painfully well-intentioned, the film is undone by a lead character who undermines any goodwill earned by the performances of John Corbett, Amy Smart, Clare Higgins, Allan Corduner, Patty Duke and Sean Astin.

Bigger Than the Sky is, like its lead character, equal parts endearing and exasperating.

Feels constrained by its unshakable predisposition toward actorly fawning.

The story is as predictable as it is saccharine. Apart from the presence of local landmarks, there's no reason the Rose City should be proud of this effort.

As the main character learns his life lesson from those kooky thespians, the rest of us are just reminded why we avoided drama club in the first place.

Audience Reviews for Bigger Than the Sky

So many things wrong with this flick, starting with a protagonist who, although "nice enough," just isn't very likeable.

Ahh, the theater, the theater, and here's a nod to loving the stage life by first time director Corley ... that sadly fails only with the casting of the lead, who embodies the drone he begins as at first, yet cannot realise the character arc to larger-than-life animal that the script calls for later. What is interesting though, beside the main plots fail, is Patty Duke and her son working together (and that she is a twin once more!).

Josh Corbett was great, Marcus Thomas was one-dimensional. This film took 3 days for me to watch....had to keep taking breaks to power through it.

Bigger Than the Sky Quotes