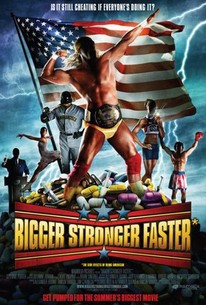 In the hopes of exploring American culture's increased obsession with winning, documentary filmmaker Christopher Bell examines the anabolic steroid use of his two brothers. After setting the stage with a look at the cultural backdrop of the 1980s -- in which hulky stars like Sylvester Stallone and Arnold Schwarzenegger were the ideal -- Bell illustrates how he and his brothers became involved in the bodybuilding subculture, eventually discovering the brutal truth that success in the lifestyle of pumping iron demanded the use of steroids.

Supergirl, The Blacklist, and More Available on Netflix This Week
Critical Consensus: Sex and the City Will Please Fans

A thoughtful, informative and thoroughly entertaining examination of the role of performance-enhancing drugs in modern life.

A lively and incisive look into the nation's growing preoccupation with pumped-up superlatives.

Smart, touching and enlightening, a combination that makes Bigger, Stronger, Faster the best documentary of the year so far.

By making this journey personal, a powerful vulnerability permeates the film.

It'll shake up your beliefs not just about steroids but about competition, hypocrisy, body obsession and American notions of masculinity.

Their mistakes are our entertainment.

A dangerous side effect of being a 'true' American.

It raises big, intriguing questions that rarely, if ever, come up in the hubbub about steroid use in professional athletics, particularly Major League Baseball.

Chris Bell's very personal documentary, tracking how steroid use influenced his body building family's game, health and interpersonal relationships, is neither an apology nor a hard-lined expose about doping.

If steroids were outlawed, only outlaws would have steroids

This is one of the best documentary films of 2008, along with 'Dear Zachary: A Letter to a Son About His Father.'

I believe that Bigger, Stronger, Faster is an overrated documentary. What is it telling us that we don't know? Absolutely nothing. We know how Anabolic Steroids affect the body and we know that people who use a drug will say it has no harmful affect on them. If you take an extreme amount of any type of drug it will cause health risks and steroids are no different. No drug is completely safe and all these bodybuilders telling us it's not hurting them are full of shit. As for the documentary; it's technically well made. I was entertained by the first half, but it just kept saying the same things over and over and over. The filmmaker doesn't take a side on the issue and that's what saves this documentary for me. With that said the documentary also comes off as unfocused. At times it seems like, hey steroids aren't that bad. Then the next second, steroids are awful and can kill you. To me the brothers and the filmmaker both cop out and blame America for the use of steroids. It's competition that drives them to take steroids. Well you could have an inkling of a backbone and take a stand against it. Growing up, I had posters of Mark McGuire and Sammy Sosa. I cheered as Barry Bonds approached Hanks record. Now when I see those faces it makes me sick. Bonds says to the media, you lie too. So I guess that makes it ok that he cheated to become the best. That's how I feel this documentary comes across. It's ok that athletes are cheating to be the best because everyone lies and cheats. We live in America and this is just a side of effect of that. That's bullshit and this documentary comes off as bullshit to me.

Eye opening documentary on steroid use here in America. Really examines the good and bad from it in a very entertaining fashion. Definately worth a watch for just about anybody.

A good muscled look at the taboo of steroid use and the biggorexic pressures on modern American men. Film-maker is in an ideal situation for doing this project, with two brothers who have used steroids and the film-maker himself having only dabbled with them once and his whole life struggled with the decision of whether or not to plunge in. I think this is just as revealing about widespread cultural hypocrisy as Grass, The Union, Bowling for Columbine, and the works of The Yes Men.

An great doc that shows us how America's need for being the best changes the way people alter themselves.