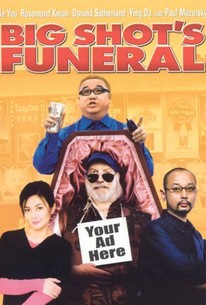 An American movie maker famous for living large wants to die in his own unique manner -- which turns out to be harder to pull off than anyone expected -- in this offbeat comedy from Chinese director Feng Xiaogang. Don Tyler (Donald Sutherland) is a well-known American filmmaker who has come to China to direct an epic scale costume drama about the last emperor of China. Lucy (Rosamund Kwan), Tyler's Chinese-American assistant and translator, hires YoYo (Ge You), a cameraman whose career has seen better days, to make a documentary about Tyler's massive project. Tyler and YoYo quickly hit it off and become friends; Tyler, however, isn't feeling especially inspired, and is haunted by thoughts of his own mortality. YoYo tells Tyler of the traditions of the common funeral in China, but Tyler is convinced YoYo was talking about a "comedy funeral," and after he falls ill following his firing by producer Tony (Paul Mazursky), Tyler begs YoYo to arrange such a memorial for him. YoYo sheepishly agrees, and when he's unsure of how to proceed, he seeks the help of noted event promoter Louis King (Ying Da). King whips up a massive funeral for Tyler, but it turns out that neither Tyler nor YoYo have the money to pay for it. King then strikes upon the idea of bringing in corporate sponsors to help bring the event into the black. Soon, dozens of multinational corporations are vying for the privilege of scoring advertising space during Tyler's televised funeral, but a fly appears in the ointment -- Tyler turns a corner, and it looks as if he won't be dying after all. Big Shot's Funeral marked the first major international project for director Feng Xiaogang, who has worked several times in the past with leading man Ge You, a major comic star in China.

You Ge
as YoYo

By American standards, the satire is about 50 years behind the times, but even accounting for cultural differences, the comedy is limp and the storytelling so inept as to provoke amazement.

Fast disintegrates into a series of semi-coherent scenes.

A twisted farce, a touching character study, a bridge around the world; I love it.

Western audiences will have no idea that this is meant to be funny.

Funeral is a wild shot at the sheer gaudiness of both advertising and entertainment, and more often than not, it's right on target.

There's been a glut of movies lately that feature a film within a film, a conceit that is already tiresome enough. But this Chinese-American co-production is so poorly executed, with such a lack of subtlety, it's one of the worst.

A frenetic satire of Hollywood pretension and Chinese capitalism -- an idea as incongruous as a Woody Allen romp about the wacky world of collective farming.

Much of this is way over the top, irritating and entertaining in equal measure.

Problematic but passably enjoyable, the appeal of Big Shot's Funeral may be more a matter of taste than quality.

Displays so little sense of style or character that it feels patched together, as if it's being made up as it goes along.

Before losing its way in the second half, Feng Xiaogang's culture-clash comedy is a ribald parody of commercialism and the invisible line that separates personal integrity from 'selling out' opportunism.

There are no featured audience reviews yet. Click the link below to see what others say about Big Shot's Funeral!