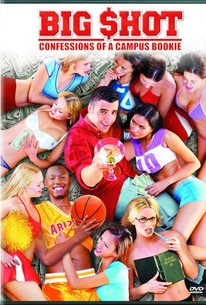 Based on a real-life 1994 scandal involving college basketball point-shaving, Big Shot: Confessions of a Campus Bookie stars David Krumholtz as the title character. Though a mere freshman on the campus of Arizona State University, Benny Silman (Krumholtz) is in charge of accepting all bets for the school's basketball games, under the watchful eye of his mentor, a high-rolling Las Vegas gambler (Nicholas Turturro). It isn't long before Benny is operating his own bookie ring, raking in big bucks at every turn. The beginning of the end for Benny occurs when A.S.U. basketball star Stevin "Hedake" Smith (Tory Kittles) suggests that he'd like a piece of the action, too. Although the Benny Silman depicted onscreen remains unrepentant and unapologetic, even when getting his just desserts at the hands of the authorities, the real Silman appears in the film's epilogue, equipped with an unexpected "Don't let this happen to you!" admonition. Filmed on location in California and Nevada (not surprisingly, the producers were unable to line up shooting dates in Arizona), the made-for-cable Big Shot: Confessions of a Campus Bookie debuted March 31, 2002 over the FX network.

Benny Silman
as Himself

Theo Rossi
as The Mook

Ron Perkins
as US Attorney

Charlie Hartsock
as Businessman
View All

Critic Reviews for Big Shot: Confessions of a Campus Bookie

With lots of beautiful women, sports action and a chance to live out an arm chair bettor's fantasy, it will appeal primarily to male audiences.

There are no featured reviews for Big Shot: Confessions of a Campus Bookie at this time.