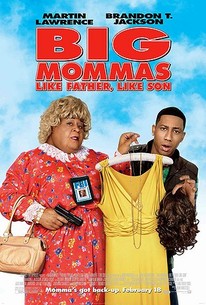 Martin Lawrence reprises the role of FBI agent Malcolm Turner -- aka, undercover grandma Big Momma -- in this installment in the Big Momma's House franchise, Big Mommas: Like Father, Like Son. Malcolm's latest assignment teams him up with his teenage stepson, Trent (Brandon T. Jackson), who unwittingly makes himself a target when he witnesses a murder. In order to keep Trent out of harm's way and solve the case behind the killing that Trent saw, the two have no choice but to go undercover at an all-girls performing arts school, with Malcolm posing as the titular rotund old lady, Big Momma, and Trent dressing up as a heavy female student named Charmaine.

Looking back, it's strange to remember that the first two movies were both hits, and that Paul Giamatti and Terrence Howard even saw enough in the premise to sign up for the original. At this point, it's really all just flab.

Can there really be a comparative and a superlative for "unfunny"? It doesn't make sense to describe this witless, embarrassing third film in the Big Momma franchise as "the unfunniest".

An assessment of the film as part of a dissertational examination of Lawrence's contribution to comedic posterity and to African-American cultural history will surely note that the film was not pre-screened for critics in advance.

Even Big Momma deserves better than this.

It seems fair to point out that of all the cross-dressing comedies of recent decades, none has channeled Some Like It Hot quite so thoroughly.

A film so drained of entertainment or simple humanity it is difficult to relate to as anything other than industrial artifact.

The father/stepson angle applies a much-needed Heimlich maneuver to a series that was choking, but it's not enough.

It's frighteningly impressive that a one-note gag has spawned three dreadful films and hundreds of millions of dollars in box office receipts. Wherever will they go next? Big Mommas 3D?

it is likely that this shambles will be the final nail in the coffin of the career of a man once touted as The Next Eddie Murphy.

A mashup of 'Some Like It Hot' (leering rooster-in-the-henhouse voyeurism) and 'Glee' (peppy musical interludes), that, on the plus side, grapples with the potent issue of young black male identity...

If you didn't enjoy the first two movies, don't see this.

Big Mommas: Like Father, Like Son was a big fail. The first one will continue to be the best of them all and should have ended with that one. I laughed maybe twice and became very bored about a quarter in. It is just a mess of a film that felt rushed and under developed. The movie tried too hard to be funny and ended up just being another eye rolling sequel. Hopefully this will be the end of it.

Not funny. It was hella irritating. Damn why do they try so hard to be funny?! One star for the songs.

Momma's got back up Big Momma is Big Comedy I have always loved Big Momma, every single movie. It seemed like a bad idea first to make another movie, since the second one had been so great, I must admit that I was kind of scared at first, but after watching it yesterday I can't help but to say that I am really satisfied with what Lawrence,Jackson and the rest of the crew made of this great saga. This time Big Momma's son, Trent(Jackson) who wishes to be a rapper, gets caught up in a bad situation after witnessing a mob crime and being trapped in it together with his father Malcom (Lawrence) A.K.A the Big Momma to hide from the mob but still get a USB that can incriminate them. Things get funnier when their hide out spot is an all girl college. Simply, Big Momma's house 3 is still funny. It has great moments, all of them due to the great cast. Lawrence is phenomenal in creating such an amazing character that is Big Momma. But Jackson too is able to create another great disguise character (Charmaine), and double the trouble double the fun. . With a great soundtrack and an awesome plot play, this movie is super entertaining. There might be its flaws, and maybe a little dumb at times, but that happens in all of movies. Overall, I recommend it to those that don't mind watching a movie just for the sake of laughters, but for those of you who don't really enjoy these types of movies you better skip it. Big Momma: "Child, Like my Aunt Yorima used to say: Its better to be alone with yourself for the rest of your life, than to be together with bad company for a minute."