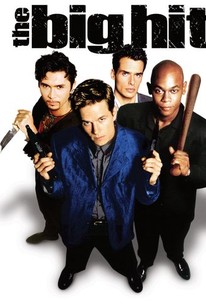 Critics Consensus: The Big Hit seeks to blend the best of Hong Kong and American action cinema, but ends up offering a muddled mush that mostly misses.

Critics Consensus: The Big Hit seeks to blend the best of Hong Kong and American action cinema, but ends up offering a muddled mush that mostly misses.

Critic Consensus: The Big Hit seeks to blend the best of Hong Kong and American action cinema, but ends up offering a muddled mush that mostly misses.

Mark Wahlberg stars in this goofy-fun Hollywood-Hong Kong action comedy as a sweet-natured hit man who falls in love with a kidnapping hostage and ends up in a death struggle with a former partner.

Critic Reviews for The Big Hit

The Big Hit is nothing more, or less, than a big goof.

In its non-A-list way, The Big Hit is the most successful attempt yet to transfer the Hong Kong action movie to Hollywood.

Score it big-time inane but a load of fun.

Insatiable moviegoers are advised to wait till this action-comedy, written by Ben Ramsey, thuds into video stores; tasteful moviegoers will avoid it altogether.

As low- intelligence entertainment goes, this film is very much a hit-and-miss affair.

The script, by rookie writer Ben Ramsey, is among the most disgraceful screenplays ever to be produced by a major studio.

The Big Hit should be titled The Big Miss. That?s a really bad pun, but it?s better than anything in this movie.

This frantic black comedy is one long obscure joke.

If you often find yourself defending the types of movies offered by Jerry Bruckheimer and Joel Silver, here's an affably dumb little action/comedy that should easily hold your attention.

Aside from everything else it does, The Big Hit proves that any subject matter can be funny, in the right hands.

Audience Reviews for The Big Hit

Melvin: The truth is, I can't handle the idea of her not liking me. I can't handle the idea of ANYBODY not liking me. Cisco: Hey Melvin, the hundred or so people you've killed in the last five years, more than likely have families that don't think too highly of you. I Always have fun watching this movie, a hit-man comedy that is self-aware, never taking itself seriously, and full of some cool action. Mark Wahlberg is a "nice" hitman, who just wants everyone to be copacetic. He has money problems due to his fiance and his bloodsucking girlfriend. Other subplots involving the discovery of masturbation, acceptance of different religions, and kidnapping, what a joy. The action scenes go back and forth between very cool and ridiculously over the top. More random humor to follow as well (all signs point to the tracebuster-buster). Cisco: Well ain't that a bitch... All I wanted to do was to sail my boat, man, you know? Navigate by the stars, see dolphins race alongside, you know, maybe even kill a few of them. The cast also includes Lou Diamond Phillips, Christina Applegate, Avery Brooks, and Elliot Gould, further fueliing the absurdity. Paris: What would you do to someone, who was fucking with you in your own house? Cisco: I'd bust some caps! My absolute favorite Guilty Pleasure movie, even more so than Starship Troopers. Melvin Smiley: Technically, you can call me a hitman. Keiko Nishi: Really? A hitman? Does that pay well? Melvin Smiley: Oh of course. I make a killing.

Hey Hey! Now that Ive FINALLY got the DVD, I can do a proper review! Man, they dont make them like they used to. All the overblown, adrenalin charged action scenes, the grace and beauty not just in the choreography but in the number of bullets and explosions one can throw in. Those were the good ole days, and along with movies like Face Off, Broken Arrow and Replacement Killers, this sorta ventures into the Action/Comedy zone, and does pretty well, I loved it. I guess this is the movie which bought Mark Wahlberg into the action genre, playing the too nice hit man, in contrast to the devilish Lou Diamond Phillips, who was hilarious as the out of control killer. Aside from the director Kirk Wong (Crime Story), the movie was produced by John Woo and Wesley Snipes, so the action shines, and not too much fancy pants stuff, just some slick moves and fight scenes and interesting comedy moments, some which were stolen from other movies, but of course, who gives a F? im having too much fun watching it. And for all action/Hong Kong style fans, so would you.

An explosive comedy. Well, it isn't all that explosive, at least by today's standards, but it is pretty hilarious.

The story isn't all that great and it is fairly stupid at times. But, it is this story that sets up the comedic elements for this film. This is one of those films where it's on the borderline between being a comedy or being a serious action flick. Unfortunately, this film has just a little too much ridiculous comedy that takes away from the seriousness of this film. This movie would have definitely benefited more from being an action adventure rather than a comedy.

The acting is OK at best and I think it is due to the fact that there are a little too many characters for a short 90 minute film. This is one of the earlier films of Mark Wahlberg and you can see that his acting isn't as mature as his latter movies like The Italian Job. I would love to say that the star of the show is China Chow because she is damn beautiful, but the real show stealer is Lou Diamond Phillips. He portrays his character nicely and his performance is memorable. One of his greatest roles. Another thing about this film is that they market this film at having Antonio Sabato Jr. as one of the co-stars. Well, he is in the film for the first 15 minutes then he disappears. Do not watch this film if you just want to see him.

The action in this film comes in the beginning and the end and it is pretty explosive and entertaining for this type of movie. There are lots of shootings and explosions to go around.

Give this film a try if you want to see a comedic action film. Just don't take it seriously because this is The Big Hit, not The Big Lebowski.