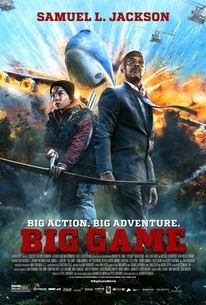 Critics Consensus: Big Game's enthusiastic throwback vibe will appeal to fans of low-budget '80s action movies, but co-writer/director Jalmari Helander adds a level of smarts and skill that make it more than just an homage.

Critics Consensus: Big Game's enthusiastic throwback vibe will appeal to fans of low-budget '80s action movies, but co-writer/director Jalmari Helander adds a level of smarts and skill that make it more than just an homage.

Critic Consensus: Big Game's enthusiastic throwback vibe will appeal to fans of low-budget '80s action movies, but co-writer/director Jalmari Helander adds a level of smarts and skill that make it more than just an homage.

In the rugged countryside of Finland, a young thirteen-year-old (Onni Tommila) embarks on a traditional quest to prove himself by spending 24 hours alone in the wild, armed with only a bow and arrow. After witnessing a spectacular crash, he discovers the escape pod from Air Force One, containing the President of the United States (Samuel L. Jackson). When they realize a group of kidnappers is hot on their trail with the intention of taking the president, this unlikely duo must escape their hunters as they search for the American Special Forces team sent out to find them. (C) Relativity

Adrian Can
as Hazar's Cameraman

The story penned by Helander with Petri Jokiranta goes heavy on the hokum, not to mention the CGI fireworks, but a dialled-down Jackson and a fired-up Tommila make for an entertaining pair.

There are times when it seems impossible that it could possibly exist as a real thing and not just as a parody trailer that accidentally got inflated to feature length.

Gleefully dumb but eager to entertain, this is cheeseball stuff baked with deliciously outsized performances and low comedy and photographed across mighty beautiful landscapes.

Mr. Jackson has never seemed so unblustery; his scenes with the younger actor have ease and humor. The authority is there but also the soul you'd want from the leader of the free world.

"Big Game" never once feels credible, and that's why it's so entertaining. Almost nothing that takes place in this movie could occur in the real world, and there's something comforting about that.

As a throwback, Big Game understands the thrills of retro action but never earns its big moments.

The real shame is that Jackson and Tommila have a prickly chemistry together, and it would have been special had it not been in a movie that sucked quite as hard.

With tongue buried so firmly in cheek that it's in danger of burrowing out the other side, Big Game is a good ol'-fashioned "so bad it's brilliant" B-movie.

The genuine sense of camaraderie between the two grounds "Big Game" so that when the film goes big - there's an aerial battle fought in and around a helicopter - there are no questions asked.

A bad movie is still a bad movie, no matter how enjoyable; Big Game is merely the best a bad movie can be.

It's quite a fun ride and will be inspiring for pre-teen boys who need heroes other than the comic-book kind.

It's the kind of film that is so enjoyable that feels so brief; it seems to end just when it should get good. [Full review in Spanish]

A very safe film that doesn't attempt anything grand or epic, definitely a throwback to the 80s. The casting of Jackson might have been better had the film gone for the hard R rating instead of the please all rating we ended up with. The film has its moments and some of the chemistry is between the likable stars. I thought the film was fun and the filmmaker has a huge future in the action genre, some of the special effects scenes top some of Hollywood's lacklustre efforts. The film never forgets its characters and has a lot of fun along the way. You can do much worse than checking out this action film. 30/10/2018.

This is one of those films that we have about 10 a year where there is no real buzz or advertisment to the film but looks ok and that's what this film is, Just ok, It's corny and silly in a few places but it's more like a teen action film so it's allowed to be them things, There is a few shall we say different action scenes that were done pretty well, The effects were good too, Overall it's a big ish dumb ish fun ish action movie that's not going to be remembered or win any awards but it's a good way to kill an hour and a half plus I suppose you could call it an action film for all the family maybe.

Another film where I'm honestly surprised that the audience's reception wasn't better than it was. Again, much like I mentioned in Let Us Prey, it doesn't really matter as long as I enjoyed it, but this was an easy to watch and really damn fun film to watch. It's a fun little tribute to old-school action films and their, sometimes, ridiculous and over-the-top stories about the president of the United States finding himself in danger with nefarious villains behind the evil deeds. Though the film does add its own unique little twists and turns and it's not strictly just a nostalgia trip. That's definitely the right way to do it. I honestly don't think I'd have much to say about this. I may not have been in love with the film, but it does over a real fast-paced and really entertaining action film. It's got a real good cast, Samuel Jackson definitely plays against type in this film, since the president is pretty much completely useless, the satire of which is not lost on me and pretty much anyone with an inkling of intelligence. It's not like they make a mockery of the United States, though they do get their shots in, but Samuel Jackson is definitely game and he does a real good job here with this role. It's not like the role has much depth, but it looked like Samuel looked inspired and he's always good whne he's inspired. Onni Tommila, Oskari, is also quite good here, even if his English isn't great, not that I can blame him for that. Him and Samuel Jackson have some surprisingly good chemistry and they're a good pair that you actually kind of want to see more of. I did like Oskari's character arc, as he's going on a hunting mission to prove he's mature enough to the people in his village. Oskari's father doesn't believe his son has the toughness necessary to achieve this mission, so he leaves a deer's head in the middle of a mountain in order to save his son the embarrassment of not being able to hunt an animal. This, taking place after he finds the president and decides to help him, motivates him to save the president of the most powerful nation in the world in order to prove his father wrong. It's actually a really good character arc when you really think about it. It definitely works. As mentioned, Onni and Samuel have great chemistry and it's such that you'd actually like to see them paired together again in a sequel. And, looking at how the film ended, it's definitely leaning in that direction and I'm actually really happy about that, if a sequel is on the way. The film might not have a tremendous amount of action, but I still enjoyed this a lot. It's a lot of fun, I wouldn't say that the film is really good, but I had a blast watching this. And it's this movie is less than 80 minutes long, so it's incredibly easy to watch and, honestly, parts of me wished that it was only slightly longer than that. I'm not complaining much, but that's the only one I can honestly think of at the moment. This is a good movie and I'd recommend it. Good stuff here.

Sam Jackson and Ray Stevenson phone it in so hard, they allow themselves to be outacted by an ESL thirteen year old with three acting credits to his name. And Jackson & Stevenson are two of my all time favourite actors, so it's hard for me to say that. Big Game isn't quite ridiculous enough to laugh *with* and isn't quite original enough to be impressed by. Instead it sits an awkward middle ground where you assume it's parody but it's not, it's just silly. The premise is that of an 80's action movie, an era/genre combo I think we should definitely bring back. Unfortunately, the execution is just not there to deliver. Maybe it would be better drunk.