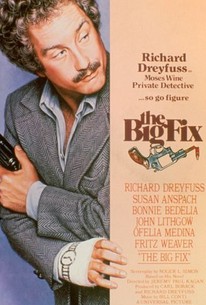 Richard Dreyfuss plays Moses Wine, an ex-Sixties radical who pays the bills as a private eye. Wine is hired to stem a smear campaign against a popular political candidate. Gradually the plot thickens into a murder case, involving a hippie leader whose values, like Wine's, have been severely compromised over the years - and who plans to blow up a major LA freeway as a protest. Susan Anspach provides a great deal of dramatic (and sexual) tension as Wine's boss. Among the minor players are future stars Mandy Patinkin and F. Murray Abraham. The Big Fix was adapted by Roger L. Simon from his own novel.

Joyce Easton
as Woman in Mercedes

Critic Reviews for The Big Fix

[Dreyfuss is] always on, hyper, eager to get to his next line. He makes a detective we can just about believe, even in an investigation so labyrinthine that you have to see the movie twice to understand what happened.

It is an awkwardly worked out mystery. Since that is what the movie is supposed to be all about, things are not as good as they should be.

The end result is a curious film noir that is difficult to find these days. [Full Review in Spanish]

The wonderful irony is that Dreyfuss is able to blackmail all his former revolutionary friends by threatening to tell everyone all the good things they were a part of. No one needs to know that they might actually be decent, upstanding people.

Never makes its case why we should care about it.

The Big Fix is a lively Western in the Dashielle Hammet style.

Audience Reviews for The Big Fix

There are no featured audience reviews yet. Click the link below to see what others say about The Big Fix!