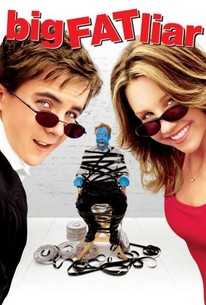 Critics Consensus: Though there's nothing that offensive about Big Fat Liar, it is filled with Hollywood cliches and cartoonish slapstick, making it strictly for kids.

Critics Consensus: Though there's nothing that offensive about Big Fat Liar, it is filled with Hollywood cliches and cartoonish slapstick, making it strictly for kids.

Critic Consensus: Though there's nothing that offensive about Big Fat Liar, it is filled with Hollywood cliches and cartoonish slapstick, making it strictly for kids.

Who's afraid of the big bad Wolf? Not Jason Shepherd. This 14-year-old thinks on his feet and when he has to prove that sleazy Hollywood producer Marty Wolf stole his class paper and is turning it into the blockbuster movie "Big Fat Liar", he is ready for battle. Traveling to Los Angeles from his home in Michigan with his best friend Kaylee, Jason tries to break into show business--literally. The result? Through a hilarious series of pranks and ruses, Jason brings one of Hollywood's most powerful producers to his knees.

Brian Turk
as The Masher

A fitfully amusing romp that, if nothing else, will appeal to fans of Malcolm in the Middle and its pubescent star, Frankie Muniz.

[A]n utterly charming and hilarious film that reminded me of the best of the Disney comedies from the 60s.

Manages to be sweet and wickedly satisfying at the same time.

Unless you're part of the Nickelodeon Nation, the cold, hard truth is you're better off dropping your 'tween at the multiplex and spending that hour and a half doing something more worthwhile.

A children's movie that's almost worth seeing even when not accompanied by a child.

Although aimed at kids, adults will find Big Fat Liar just as entertaining, giving them a chance to reacquaint themselves with their own "kid within." Goofy, adorable and laughable. Big Fat Liar is one funny film.

Paul Giamatti just goes for it.

It's a feature best viewed on mute. Or not at all.

...for a so-called comedy, there are few laughs to be had.

A good comedy, not great!

I loved this as a kid, but now as I watch it again, it's not that good. It has it's moments though. The whole "blue" part with Paul Giamatti makes it hilarious. Grade: B-