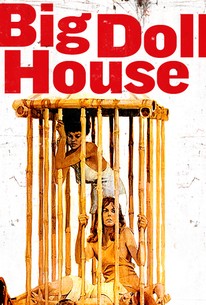 Worth the admission price in itself in The Big Doll House are the knock-down, drag-out fights between prisoner Pam Grier and sadistic guard Sid Haig. Beyond this guilty pleasure, however, the film is just another "babes behind bars" opus. Treated like excrement, the girls (all of whom appear to have had recent breast implants) plot a daring escape. Director Jack Hill is a specialist in this sort of sleazy fare, so there's very little waste footage during the climactic breakout. Whether the film is worth watching is entirely up to the viewer.

It can tickle the funny bone as a guilty pleasure film.

Hill deserves an enormous amount of credit for following the material as far as it goes, maintaining its ogle-worthy appeal for longer than anyone could possibly expect.

A first-person lament, the title song establishes that the story will be told sympathetically from the point of view of the female inmates, even if their humiliation and suffering (and their communal showers) are the film's raison d'etre.

Filmed by Hill with a luxuriant eye for the Philippines, an appreciation for offhand poesy, and a rather Sirkian direction of actresses

When the skin factor is low, Sid Haig saves the show! Sure, overall it's a piece of crap, but you'll be hard-pressed to find a piece of crap film finer than this one.

During the seventies, legendary producer and distributor Roger Corman started a company and began making exploitation films by the dozen. Thanks to incentives, many films were made in the Philippines during this time, most of them falling into different genres. Some were Blaxploitation films; others were simply gory road movies, and futuristic tropes. This film falls under the heading of "women in prison," and man does it deliver. Not based on any true events or information about women in the Philippine prison system, this film takes everything an audience might want to see and throws it onscreen. The women in question are all jailed for federal offenses which range from murder to drugs. Many are ruthless, some are hell-bent on escape, and others wait for the next chance to exert some swift violence against their captors. The women are also tortured under the direction of a masked man by their warden, Dietrich (Loder), which leads to a plot against the prison as well as an escape attempt. For what it is, it is very entertaining, and though much of this is unforgivably crude to some people, it's fun to watch. Everything about this film is so silly that it's absolutely sublime. The film boasts nudity by the boatload, torture though always tastefully done, mud wrestling, lesbianism, shower scenes, and gunplay as well. If you're looking for a classic film, starring Pam Grier in one of her first roles, and watch this, you are going to have to be rudely awakened. This is pure exploitative fun, and though it may not be in good taste to like these kinds of films, there's such a goofiness and self-awareness to this that it ingratiates the film to me. No matter what, this film will entertain you, because it's too perfect not to.

The Big Doll House happens to be one of the really good "women in prison" exploitation classics, from none other than genre director Jack Hill and producer Roger Corman. It may be cheap on budget but damn is it ever entertaining. The ridiculous dialogue and acting combined with a really cheesy storyline that has every cliche in the book: lesbianism, mud wrestling, shower scenes, female torture, male torture by angry females... well, you get the idea. This is one of the best of the genre, for sure, with lots of nudity and even a bit part for Corman regular Sid Haig. AND, of course, the always lucious Pam Grier along with a host of other hotties. I very much enjoyed this one and the two follow-ups. The "sequels" had their share of problems, but from now on when I think of "women in prison" movies, The Big Doll House springs to mind.

I've never understood the appeal of the women behind bars genre, but this movie wasn't all that bad, not good, but not horrible.

New meat enters the big house, in the shape of Collier and she learns that it won't be an easy walk in the park. Grear, Alcott, Bodine, Harad and Ferina welcome her to the rough and tumble endurance of prison life and the importance of holding your own to stay alive. Be it, from your inmates or that of their sadistic prison warden named Miss Diestrich. Then there are two peddlers, Harry and Fred who play off the inmates to get what they want. Roger Corman sent out exploitation director Jack Hill to the Banana republic (Philippines) with very little money, but on-hand he had a group of stunning women to work with. Though, to Corman's surprise, the end result was nothing but phenomenal, since it did extremely well with moviegoers. Its been done before, but this old hat Women-In-Prison concept for "Big Doll House" became revolutionary by giving it an ounce of fresh treatment (or maybe it was just great timing) that simply appealed to the drive-in audience to ensure the genre would erupt again. Hill's film is quite watered-down for a WIP exploitation feature (compared to its European cousins), but there are enough nitty, gritty elements involving random drug abuse, sadistic torture, and sexual antics, pumping gunfights and wild cat fights in a very energetic pattern. Production-wise, it's very solid for a meagre budget with it drumming in with a saucy score (and also Pam Grier's tantalisingly, groovy title song) and workman-like camera-work that had a great eye to detail. The bang-up story mainly focuses on a group of well-rounded and strong willed, firebrands who are not easy pushovers. Where they're trying to keep their spirit, pride and dignity in tack. A nice dash of snappy humour is worked into the salty dialogues and fiery language. There are some silly aspects, but it does bust out surprises, spontaneous inventions and comic relief, thanks largely to the minor turn by the charismatic character actor Sid Haig. But it was the memorable Pam Grier's steamily, spruced performance that steals every frame. She was the full package and afterwards would go on to be a true Blaxploitation star. Although, the attractively biting Roberta Collins holds her own quite well and Judy Brown, Pat Woodell and Brooke Mills add to the unique, spicy ensemble. Kathryn Loder performance makes headway too, as the stern and lean prison warden. Director Jack Hill's hardened direction is extremely sturdy and he keeps a quick rapid throughout. An American WIP exploitation flick that keeps it rather tasteful, but still highly entertaining b-grade material with a well-fitted cast.