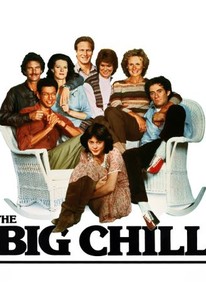 Critics Consensus: The Big Chill captures a generation's growing ennui with a terrific cast, a handful of perceptive insights, and one of the decade's best film soundtracks.

Critics Consensus: The Big Chill captures a generation's growing ennui with a terrific cast, a handful of perceptive insights, and one of the decade's best film soundtracks.

Critic Consensus: The Big Chill captures a generation's growing ennui with a terrific cast, a handful of perceptive insights, and one of the decade's best film soundtracks.

A re-release of the 1983 classic. The gathering of old college friends for a funeral brings out their real personalities.

Ken Place
as Peter The Cop

Kevin Costner
as Alex
View All

News & Interviews for The Big Chill

View All The Big Chill News

Critic Reviews for The Big Chill

What might have been a meaningful exploration of the changes wrought by 20 years of abrasive reality is diverted, essentially, into who's going to wind up sleeping with whom.

Characters are generally middle-of-the-roaders, and pic lacks a tough-minded spokesman who might bring them all up short for a moment.

There is no place for depth or nuance in this slickly engineered complacency machine.

A wickedly funny yet compassionate comedy.

It establishes a very interesting union between reality and fiction, between past and present, between errors and their correction. [Full Review in Spanish]

A funny, sad, warm-hearted story about real people who passed sorrowfully into the '80s from the '60s.

Even if the film isn't timeless, the soundtrack certainly is.

...even though it's aware of their narcissism, The Big Chill still views its characters sympathetically, even when they do little to invite much sympathy themselves.

Audience Reviews for The Big Chill

A lifeless and depressing movie that seems more interested in its songs than in creating a relatable plot (yet even if the soundtrack is great the lyrics simply don't reflect what we see on screen), forcing us to stay in the company of a group of unlikable narcissists.

A perfect hang-out film: one of the movies you revisit just to say hi again to some old friends. A far-fetched as all hell non-ending leaves a bit of a sour taste.

Until the second half, this film is great. We get to know the characters and we start to understand the tensions that have long existed between them, the way this group of old friends reunited for one member's funeral has changed over time and may not be what it once was. The sense of loss is compelling, and the prospect for rediscovery and rebirth sucks you in, but in the end I walked away disappointed. I can't say for sure why, but everything seemed to get stagier as the ending approached, and aside from a pithy reality check from William Hurt's character, nothing really comes of it all. Some characters get closer to getting what they've wanted and struggled to find all these years, but mostly, it just fades away again, and not in any way that makes an impact or makes you think about this scene. I'm told that, as someone born in the 80s, this film isn't really for me - that it's something that Boomers identified much more with. It's searching for that dirty realism of Last Picture Show or a Raymond Carver story, the hard business of day-to-day life, but once the enticing exposition finishes, you realize that the stakes are pretty low. I was kind of wishing that they all find the stiff's long-lost treasure map or the draft of his novel, or something, but you get the sense that when the characters leave this place, though they'll realize how much they've changed since they were young, the time they spent here probably won't change them at all... and thus, in the end, the films lets you down, failing to provide that "and this is why it matters" punch in the gut that "small stories" have to.

This one is a timeless gem. Seven friends are reunited after a long time, not for the best of reasons though - the eighth member of their once intimate group having committed suicide. With emotions teetering between joy and sorrow, they decide to make the most out of the time they have. A night of booze and laughs follows, and soon each one realize how much things have changed in their lives. The most captivating aspect about the movie, something every viewer relates to himself, is that sense of dreams lost and ideals surrendered - how life never turn out as we plan it to be.