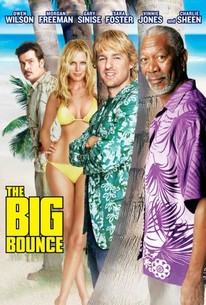 Critics Consensus: Lazily crafted and light on substance, The Big Bounce takes few chances and strands its promising cast in a subpar adaptation that fails to do its source material justice.

Critics Consensus: Lazily crafted and light on substance, The Big Bounce takes few chances and strands its promising cast in a subpar adaptation that fails to do its source material justice.

Critic Consensus: Lazily crafted and light on substance, The Big Bounce takes few chances and strands its promising cast in a subpar adaptation that fails to do its source material justice.

George Armitage directs this big-screen adaptation of Elmore Leonard's The Big Bounce. Jack Ryan (Owen Wilson) is an occasional thief who tends to a judge (Morgan Freeman). A woman involved with Ray Ritchie (Gary Sinese), a real estate developer of questionable ethics, seduces Jack. Ritchie and the judge are old enemies, complicating Jack's moral dilemma when the girls asks Jack to help her double-cross Ritchie. The book was adapted once before with Ryan O'Neal in the Owen Wilson role.

Anahit Minasyan
as Virginia No. 9

Mike Renfro
as Worker No. 1

Tony Dorsett
as Worker No. 2

John John Florence
as Himself

Kala Alexander
as Himself

Kelly Slater
as Himself
View All

News & Interviews for The Big Bounce

View All The Big Bounce News

Critic Reviews for The Big Bounce

Newcomer Foster cites Lauren Bacall as a precursor, but her ingénue fatale is more like a lost Olsen triplet.

The story has been so poked and prodded and spun around it barely knows how to end.

Everything here is too mild, too sloppy.

Given a choice between shovelling my driveway or going to see The Big Bounce again, I would choose the driveway.

Not a bad film, despite what you may have heard, but there is no doubt it should have been a lot better.

With gorgeous Hawaiian cinematography, a charming Owen Wilson, and a clever script, I found it eminently enjoyable.

This movie is all looks and no brains.

It's sexy, offbeat fun for the most part, but it's way too laid-back for its own good and, in the end, obstinately refuses to be anything more than the sum of its highly promising parts.

Yet another screen adaptation of an Elmore Leonard novel, but this one just doesn't work.

Audience Reviews for The Big Bounce

This is a great movie that is always fun to watch. The plot is great, the characters are really fun to watch and the Hawaii backdrop is a nice touch. Owen Wilson, to me, is always funny and this was no exception. I really like the comedy approach to noir, for some reason it just really works.

Jack (Owen Wilson) is a low-key thief in Hawaii, looking for a scam after getting fired from a construction job. He winds up working for district judge Walter Crewes (Morgan Freeman), doing odd jobs and gazing at Nancy (Sara Foster), the hooker mistress of the construction magnate (Gary Sinise),from beginning to end, the leading female character, Nancy, is central to the plot of the story, Heists almost get pulled, fates almost intersect, but not quite....Apart from some beautiful shots of Hawaii and some kewl cliff diving footage, there was nothing that really grabbed me about this movie......

Its an ok light hearted funy film a bit pointless but its ok really though this film just seems like everyones conning everyone and then gary sinines has the most smallest part that it was pointless having him in the movie which a was disappointed about!!

Frank: I'm desperate for this money and we're friend, right? Jack Ryan: Yeah, we're friends. But, you know, it's the type of friendship where if you're in trouble, I probably won't be there for you. Just like I wouldn't expect you to be there for me. It's a more honest friendship. It's not this like phony thing. It's a genuine friendship. I can't trust you. You can't trust me. I'm not gonna take a bullet for you. I'm not gonna jump on a grenade for you. A laid back con caper/comedy. I wanna use the phrase surfer noir (I should save it for a better movie, but when will I get another chance). And of course it's laid back, it takes place in Hawaii. Lou Harris: You wanna piss with me? Jack Ryan: I don't even understand what you're saying. Do I wanna piss with you? Based off a book by Elmore Leonard, Owen Wilson stars as Jack Ryan, a small-time con artist living in Hawaii. After causing some trouble with a local boss, Gary Sinese, he is fired from a job and makes his way under the eyes of a judge/hotel manager, Morgan Freeman. Jack also meets the local hottie/con artist Nancy, played by Sara Foster. The two form a relationship of sorts, with Jack showing her some conning. The movie drifts along developing a small caper plot involving some money and twists, before reaching the final ending twist. Nancy Hayes: Jack, what do you think will happen if that money reaches those thugs. Jack Ryan: I don't know. They'll probably have a hell of a luau. Nancy Hayes: I mean to Walter! Jack Ryan: We'll probably get invited. The dialog is nice and sharp of course because it is from another book by Elmore Leonard. The Hawaii aspect is also effective because it doesn't just show the same old sights, it does a good job of going to different places. The cast is also in a laid back mode and it's just kind of nice. It may not ever be seen as a great or memorable movie, but I have a good time watching it. Bob Rogers, Jr.: You trying to be cute? Walter Crewes: Now, Junior, who can be cute with you around? Bob Rogers, Jr.: This is company business, Walter. Walter Crewes: Does he work for you? Bob Rogers, Jr.: No, but we paid him off and he agreed to leave. Walter Crewes: You paid him off because you owed him. Now he doesn't work for you anymore. Right? Right. So if he doesn't want to go anywhere, he doesn't have to. Right? Right. Jack Ryan: Right. Bob Rogers, Jr.: You gonna let him fight your battles for you? Jack Ryan: Yeah. He seems to be doing a good job.