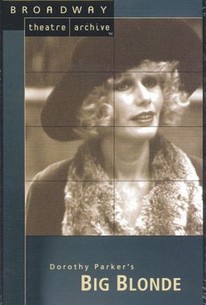 Sally Kellerman stars in this made-for-television adaptation of the short story by Dorothy Parker. A free-spirited model (Kellerman) decides it's time to settle down, and gets married to a salesman (John Lithgow). Her new husband, however, soon turns out to be an ill-tempered alcoholic who is often off on the road, and she soon finds herself turning to liquor and other men for solace as her spirit slowly collapses. Also starring Anita Morris and George Coe, The Big Blonde was produced and first aired as part of the PBS series Great Performances.

There are no critic reviews yet for Big Blonde. Keep checking Rotten Tomatoes for updates!

There are no featured reviews for Big Blonde at this time.