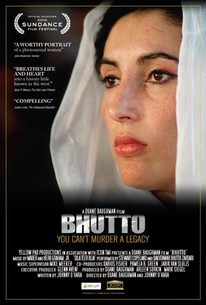 BHUTTO is the definitive documentary that chronicles the life of one of the most complex and fascinating characters of our time. Hers is an epic tale of Shakespearean dimension. It's the story of the first woman in history to lead a Muslim nation: Pakistan. Newsweek called it the most dangerous place in the world, and the home of nuclear war heads and the Taliban. Benazir Bhutto was born into a wealthy landowning family that became Pakistan's dominant political dynasty. Often referred to as the "Kennedys of Pakistan," the Bhuttos share a painful history of triumph and tragedy, played out on an international stage. Educated at Harvard and Oxford, and with an eye on a foreign service career, Benazir's life changed forever when her father, Pakistan's first democratically elected president, chose Benazir to carry his political mantle over the family's eldest son. In the late 70's, when Zulfikar Ali Bhutto was overthrown and executed by his handpicked Army Chief, Benazir swore to avenge her father and restore democracy - or to die trying. Benazir Bhutto may have broken the Islamic glass ceiling, but she was wed in a traditional arranged marriage to then-Karachi playboy Asif Ali Zardari. Her two terms in power saw acts of courage and controversy as she eradicated polio and stood up for women, while fighting the male-dominated political elite, and a nervous military leadership, while battling accusations of corruption and scandal. In 2007, with the South Asian country rolling in turmoil and under the thumb of yet another military dictator, Benazir was called back onto the world stage as Pakistan's best hope for democracy. With her assassination she transcended politics, but left a legacy of simmering controversy and undeniable courage that will be debated for years. -- (C) Official Site

While their subject is fascinating and her nation's role in propping up the Taliban has had repercussions from New York to India, the filmmakers don't find a straightforward way to tell Bhutto's story.

An exhaustive, if sometimes exhausting, look at a larger-than-life figure.

At one point, Bhutto says she wants to avenge her father's death. "Bhutto'' proves she did.

While the film gives us a strong sense of Bhutto's personality and strength,...it can only suggest the daily family and political machinations that were her reality, and leaves no clear sense of the truth of the corruption charges that dogged her.

Benazir Bhutto had a life that makes fiction pale by comparison.

O'Hara's doc not only recounts the leader's life and career; it also offers a fascinating look back at the history of her troubled nation, wisely placing its current political volatility in an easily graspable context.

...the film remains a gripping account, and a model of how to make history come graphically alive onscreen.

...the subjects of this documentary are incredibly complex and the film covers them at a hurried pace...

Filmmakers Duane Baughman and Johnny O'Hara present a stirring biographical documentary about Benazir Bhutto, one of history's most fascinating and tragic political leaders.

If you know only sketchy details about her life, as I did, it's a great introduction. But if you want more than that, you'll have to look elsewhere.

If screenwriters dared to put a woman through the ordeals that Benazir Bhutto faced, half the audience would refuse to believe it.

The definitive documentary on one of the game changers in Pakistan who was killed before she completed her ultimate destiny. Nonetheless one comes away from this documentary wondering if Bhutto would ever be able to accomplish what she sets out to accomplish if she had lived due to the delicate balance between parliamentarians and the army in that country.

This documentary portrays the life and death of Benazir Bhutto, and through her story, we learn most of the history of Pakistan and the region. Bhutto is an inspirational figure for many in the Muslim world, a democratizing, egalitarian, faithful Muslim woman who ascended to political prominence despite the gender bias of her culture. And I think this film does her memory justice. Most importantly, I think many Americans don't know much about the Middle East, thinking that some of the problems emanating from that region came out of nowhere. Rather, this film, through Bhutto's story, gives us context and a valuable history lesson. Luminaries of Muslim scholarship like Reza Aslan and actual participants like Bhutto's widower, Zardari, also add insightful commentary. Overall, I think this documentary should be required viewing for anyone wanting to debate foreign policy. Overall, I think this required viewing for

While "Bhutto" starts and ends with the assassination of Benazir Bhutto in 2007, the story does not start with her but with her father Zulfikar Ali Bhutto, an ambassador to the United Nations, nationalist leader, founder of the People's Pakistan Party, and Pakistani Prime Minister before being forced out and executed on trumped up charges.(Is there any coup that Kissinger has not been involved with?) This very informative and incisive documentary details the history of Pakistan which was baptized in the blood of partition, leading to a decades long standoff with India, especially on the subject of Kandahar. With the country forever being on a war footing, the military has never been far from power, even with a civilian prime minister. With 25% of the budget being allocated to the military, little is given over to basic services including education. That is exacerbated by the wars in neighboring Afghanistan, as the money flows from the United States to support dictators in power who support the party line. That makes any struggle for democracy an uphill battle. For that to happen, the citizenry must be educated but right now that slack is picked up by the madrassas who tend to err on the side of fanatacism. Into that gap stepped Benazir Bhutto, appointed ahead of her brothers to be her father's political heir(her political heir is her son, not one of her two older daughters) which is huge in a country where honor killings are commonplace. Even when she became prime minister, change was slow, as she was eventually removed from power, not once but twice. And on returning from exile in 2007, she realized the necessity of her actions, even while knowing what the cost could be. Throughout "Bhutto," Benazir's disembodied voice is heard from an interview, giving the feel of her speaking from beyond the grave. While the documentary verges on hagiography, it also allows a remarkable range of voices to be heard, including different factions within her family(fractured but not on King Lear level). Even former President Pervez Musharraf has his say. And I guess you cannot bring up the 60's without the rock and roll cliches, can you?