Beyond the Valley of the Dolls1970 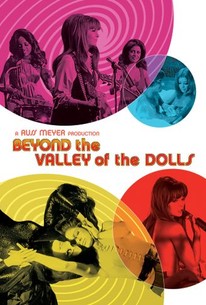 Critics Consensus: Confidently campy and played with groovy conviction, Beyond the Valley of the Dolls is an exuberant expression of both the hilarity and terror that comes with free love.

Critic Consensus: Confidently campy and played with groovy conviction, Beyond the Valley of the Dolls is an exuberant expression of both the hilarity and terror that comes with free love.

Beyond the Valley of the Dolls Photos

Roundly panned upon its first release, Russ Meyer's X-rated Beyond the Valley of the Dolls has gained a huge cult following over the years for its unique mix of pop music, high camp, and exploitation. Dolly Read, Cynthia Myers and Marcia McBroom comprise a rock group called the Carrie Nations, who'll do anything to hit it big in show business. Their "anything goes" attitudes towards pot, group sex and lesbianism lead to several sticky plot complications, culminating in a murder spree (in one shot, a man is decapitated as the 20th Century-Fox fanfare is heard on the soundtrack). Bearing absolutely no relation to the Jacqueline Susann novel/film Valley of the Dolls, Beyond the Valley of the Dolls was coscripted by film critic Roger Ebert.

Ray Angel
as Girl in Tub

Ian Sander
as Boy in Tub

Rick Holmes
as Man with Glasses

News & Interviews for Beyond the Valley of the Dolls

View All Beyond the Valley of the Dolls News

Critic Reviews for Beyond the Valley of the Dolls

This trashy, gaudy, sound-stage vulgarity about low life among the high life is as funny as a burning orphanage.

With his first movie for a major studio, Meyer simply did what he'd been doing for years, only bigger and better.

Any movie that Jacqueline Susann thinks would damage her reputation as a writer cannot be all bad. Beyond the Valley of the Dolls isn't -- which is not to say it is any good.

A psychedelic wow that serves up the free love, plunging necklines, androgynous boys, and lusty lezzies of the era with a narcotized abandon.

Beyond the Valley of the Dolls isn't just a cult movie, it's the greatest cult movie ever made.

Never has camp and crazy looked as good!

Besides being an addictively entertaining guilty pleasure from beginning to end, it's that rare movie that transcends its opportunistic origins to become a true singularity; a movie like no other.

Russ Meyer's ultra-lurid 1970 magnum opus, infamously penned by a young Roger Ebert, remains a towering achievement. What it achieves, however, is difficult to define.

Caught in the right frame of mind, it offers plenty of groovy sights ... [but] the violent climax is highly problematic.

Like Valley of the Dolls, Beyond is a howler of a movie, with the crucial difference being that Meyer and Ebert intended it that way.

A funky, wonky, and entertaining jolt into the decade that bred free loving, hipster rockers, and hippies...

The very definition of self-conscious camp, certainly not Art but much too intelligent for Trash.

Audience Reviews for Beyond the Valley of the Dolls

Hilariously bizarre and well-paced in its escalation of insanity, this Roger Ebert-scripted film is, nonetheless, a sleazy and roughly-edited work of nonsense. It has a lot to say, and even more to show, but it ultimately doesn't feel like it's about anything in general.

Absolutley insane and bizarre. I loved it!

I have no idea what the fuck I just watched, but I kind of loved it. This is High Camp, effortless and energetic and unironically involving. I was totally submerged in the bizarre plot until the last ten minutes or so, which I think is an incredible triumph on Russ Meyer's part, until I realized that a woman was being chased around by a breasted man in a cape calling himself Superwoman. There are some things that you simply CAN'T suspend disbelief for, but the movie isn't any weaker for it...it just kicks it back to camp land. Beyond the Valley of the Dolls will probably have zero crossover appeal to anyone who doesn't like shitty movies, which makes me sad. I wouldn't even try to initiate a friend with this, either. The drop into awfulness is very steep and played almost totally straight, which I really admire Dolls for. The only irony you find in the movie is blink-and-you'll-miss-them lines to the audience. I read an interview that Roger Ebert, who wrote the movie, did with someone, in which he claimed that he wrote the film as a parody of violent shitty movies, and the interviewer replied "did the director know this?" Apparently not. And that is good.

Beyond the Valley of the Dolls Quotes