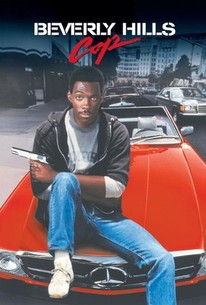 What's that wisecracking young black guy (Eddie Murphy) in that beat-up Chevy Nova doing in lily-white Beverly Hills? He's Axel Foley, a Detroit detective who's been sent on involuntary vacation because he refuses to drop his intention of avenging his friend's murder. Warned by Beverly Hills police chief Ronny Cox to stay out of trouble, Foley nonetheless dogs the trail of above-the-law Steven Berkoff, the British crime czar who was responsible for the murder of Foley's friend. With the help of sympathetic local cops Judge Reinhold and John Ashton and lady friend Lisa Eilbacher, Foley attempts to corner Berkoff in his mansion, which leads to a wild slapsticky shootout. ~ Hal Erickson, Rovi

This lickety-split action comedy is distinguished by the wry, character-conscious direction of Martin Brest, who coaxes a silver-bullet performance from star Eddie Murphy that's practically criminal in its accuracy.

Murphy exudes the kind of cheeky, cocky charm that has been missing from the screen since Cagney was a pup, snarling his way out of the ghetto.

It's one of the few star comedies of the early 80s to allot some humor and personality to the minor characters.

Expectations that Eddie Murphy's street brand of rebelliousness would devastate staid and glittery Beverly Hills are not entirely met in a film that grows increasingly dramatic.

The connecting stuff is just bagatelle.

Eddie Murphy looks like the latest victim of the Star Magic Syndrome, in which it is assumed that a movie will be a hit simply because it stars an enormously talented person.

Pretty funny after all these years. The position of Murphy as an emerging star feels very genuine. [Full review in Spanish].

...a work of racial subversion that's both hilarious and cathartic.

An exceptional entry in the '80s comedy/action genre...

It has a creamy surface and junky insides.

Away from Murphy's iconic comic status and star quality at the time, he was a limited dramatic actor - making almost untenable the tauter moments of the plot.

Axel Foley: Disturbing the peace? I got thrown out of a window! What's the fuckin' charge for getting pushed out of a moving car, huh? Jaywalking?  "The Heat Is On!" I had seen glimpses of this movie on television many times, but this was surprisingly the first time I watched the whole movie. What I got from it wad that Eddie Murphy used to be a boss. I absolutely loved him in this movie. From the first scene where he is undercover selling some shady guys a shit load of cigarettes to his final smile as the film ends; he's on the top of his game. He's hilarious, but at times his performance teeters on being 100% serious. The guy obviously used to be an amazing comedic actor and if you need proof of that, look no further. Beverly Hills Cop is classic Eddie Murphy for all the people who are over the shit he's throwing out now. Axel Foley is a Detroit cop who is described as a great cook with great potential, but he's a little too aggressive. He's smart, charismatic, and extremely arrogant. He goes behind his chiefs back and sets up undercover busts without authorization. One day, an old friend pays him a visit and they hang out for awhile. When they return to Foley'a apartment, two men jump them, knocking Foley unconscious and killing his friend. The two men were professionals. Foley is told to stay away from the case, but he takes vacation in Beverly Hills(his friends last employment spot) on a hunch that the friends employer had something to do with his death. He runs into some Beverly Hills cops and then a lot of shit goes down.  This movie really is just an extremely fun time. There's a lot of slapstick like gags thrown in for humorous effect, but the film is at its best when Murphy is talking and bullshitting. The dialogue is actually surprisingly good and occasionally really smart, while the music choices seem a little much at times. Overall the formula Martin Breast used here was a good one. The movie feels like it flies by and there's no down time. It's a quick moving and above average cop comedy. Vintage Eddie Murphy fans already know this film and, for the most part, probably love it. For all you people who have never seen a glimpse of some old school Murphy and have only seen movies from him like Haunted Mansion; you owe it to yourself to give this one a look. No matter what your feelings toward Murphy are, they will be changed when you watch him kill it in Beverly Hills Cop. I've always liked Murphy, but I now have a new level of respect for him.

Funny and entertaining, Beverly Hills Cop it's one of the best comedy actions from the 80's, without being cliche or boring.

Beverly Hills Cop is along with the first Lethal Weapon one of best buddy cop action films that blends bits of humor. Eddie Murphy gives a good performance here. The film works well as an action comedy, and this is one of the few films of Eddie Murphy's that I really enjoyed. He was still good when he made this. Now, he's tired out, and needs to retire. Beverly Hills Cop has a good cast starring opposite Eddie Murphy, and the plot is very good as well. I normally don't like these types of films, but I surprisingly very much enjoyed this film. Beverly Hills Cop is entertaining and has some effective action mixed with good comedy. Eddie Murphy has made better films, but for what it is, Beverly Hills Cop is a fun, entertaining comedic action romp that will appeal to action buffs. The film at times falls flat, and is imperfect, but for the most part, it manages to be a good action film with good comedy elements., The cast do a fine job here, and the film is a must see for fans of Eddie Murphy. Beverly Hills Cop may not be perfect, but it has enough elements to keep you entertained till the very end. I enjoyed this film, thought it was a pleasant time waster and it had some memorable scenes, and good action to keep me entertained. Overall not an excellent film, but good enough to waste a good hour and thirty minutes. Beverly Hills Cop is a fun ride. Not perfect, but entertaining enough to keep you interested from start to finish.