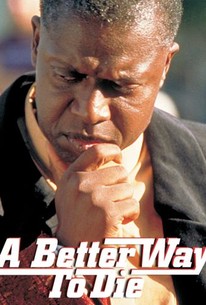 A Better Way to Die Photos

In this thriller, a policeman decides to quit the force so he can settle down with his girlfriend, but his idyllic new life becomes a nightmare when he's robbed and beaten within an inch of his life. The attack turns out to be only the beginning of his problems; when he tries to report the crime, he's mistaken for a federal agent who has disappeared. The FBI believes the phantom agent has run away with important information, while the Mafia know that he's learned enough about their operations to shut them down; wanted by both the law and the underworld, an innocent man must fight for his survival. A Better Way to Die stars Andre Braugher, Lou Diamond Phillips, Scott Wiper, and Natasha Henstridge.

Richard Haje
as The Mule

Dick Hagerman
as Deputy
View All

Critic Reviews for A Better Way to Die

...the few good action sequences and plethora of character actors that pop up make this a worthwhile rental.

There are no featured reviews for A Better Way to Die at this time.

A Better Way to Die Quotes