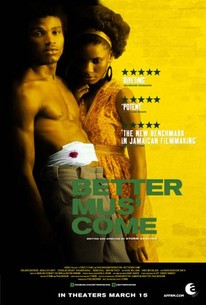 In Kingston, Jamaica, in the late 1970s, the two main political parties enlist the support of gangs to enforce their policies and advance their political agenda. Young Ricky is a community leader and father, whose gang is aligned to one party. One day he meets Kamala, who belongs to a community controlled by the other party, and the two instantly connect. Will their love triumph, or will bigger forces win the day? Based on true events. Better Mus' Come is the debut film of writer/director Storm Saulter and was produced by award-winning filmmaker Paul Bucknor (The Full Monty). The film has a sizzling original score and all Jamaican lead cast, with an electrifying cameo appearance by Roger Guenveur Smith (Malcolm X, Do the Right Thing, American Gangster) as Prime Minister, delivering the political speech that ended with the promise, "Better Mus Come!", reflecting his party's commitment to greater social justice and equality for all Jamaicans. (c) Official FB

Despite its cultural detail and fetching leads this Jamaican director's colorful debut feature is undone by ragged scene construction, weak acting and a scattered script.

It's a tad overstuffed, but never lacks for interest.

A gorgeous (if at times overripe) melodrama set during the deadly political unrest of late-'70s Jamaica.

Vibrantly arresting, Saulter explores the history of Cold War politics on another small island, one we're not accustomed to seeing.

There are no featured reviews for Better Mus Come at this time.