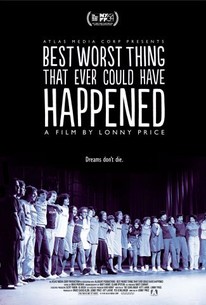 Best Worst Thing That Ever Could Have Happened... Videos

Stephen Sondheim, Harold Prince, and George Furth's much ballyhooed reverse chronology musical Merrily We Roll Along closed after just 16 performances in 1981 but gradually assumed legend status. This alternately heartbreaking and euphoric film focuses on the original cast members, then and now, and the special place this experience holds in their memories.

Critic Reviews for Best Worst Thing That Ever Could Have Happened...

More impressively, Price has incorporated the retrospective theme into his documentary with a second act in which the performers reveal the different directions life has taken them since they appeared in the show.

If you have any Broadway or Sondheim or show business in your bloodstream, you should go.

Funnily enough, there may be more poignancy in this heart-piercing anatomy of a flop than the original musical was able to muster.

The story of a legendary, rare theatrical failure from Stephen Sondheim and Hal Prince doubles as an inspiring tale of ambition, youth and why we make art

By showing us what's become of the dewy-eyed kids of 1981, he evokes many of the emotions -- from ecstasy to disappointment -- of Sondheim's musical.

A love letter to the theater-and a deeply poignant one at that-Lonny Price's sentimental documentary Best Worst Thing That Ever Could Have Happened... is a bittersweet gem.

If you're a musical-theatre geek who once listened endlessly to Stephen Sondheim showtunes while gazing at framed playbills on your bedroom wall, this is the movie for you.

Youthful dreams crash up against harsh reality in this fascinating look at the disastrous Broadway premiere of Stephen Sondheim and George Furth's 1981 musical, Merrily We Roll Along.

... like watching the greatest theater camp of all time.

Covers a rich swath of emotional and creative ground as it tracks the unexpected failure of theater gods Stephen Sondheim and Hal Prince's hugely anticipated 1981 Broadway collaboration "Merrily We Roll Along."

"Best Worst Thing That Ever Could Have Happened" illustrates an essential principle of art: You have to risk cataclysmic failure - and, at times, fall into it - if you're planning to scale the heights.

Audience Reviews for Best Worst Thing That Ever Could Have Happened...

COMPANY LOVES MISERY - My Review of BEST WORST THING THAT EVER COULD HAVE HAPPENED (3 Stars) In 1981, Stephen Sondheim and Harold Prince, both Broadway legends, launched a musical called MERRILY WE ROLL ALONG, and it closed after a mere 16 performances, making it the rare and unexpected flop in their respective careers. Told in reverse chronology, the show starred a group of young actors playing middle aged characters at the start who appear younger and more innocent as the story unfolds, ending on a more refreshing note than how it began. This conceit ingeniously carries over into the documentary by original cast member Lonny Price as he has his fellow actors looking further and further back at their memories until we're left with that short period where they felt like the world was their oyster. For musical theatre geeks, this film will be catnip to them. Some of the original cast have gone on to enormous success, most notably Jason Alexander, but most did not. BEST WORST THING operates in that bittersweet spot where people persevere despite having their dreams crushed. I wasn't familiar with the musical, but what I heard in the film sounds VERY, VERY 1970s white. There's a person of color in the cast, but she's given very short shrift. This is the story of a bunch of white theatre kids who couldn't believe their luck when an open call went out to star in an original musical by two of the genre's greats. Luckily there was much footage of the audition and rehearsal process, and the cast's excitement is palpable. We're even treated to an audio snippet in which Sondheim and Prince attended an actor's birthday party and played a new song for the group. Watching this, I suddenly found the urge to pack my bags, put $15 in my pocket, and hoof it out to the Great White Way singing "God I hope I get it!" the entire way. Although MERRILY has since been revived all over the world to considerable acclaim and box office success, the initial run came as an extreme disappointment to this group of hopefuls. Price unearths an interview he gave when originally cast and he says that even if he never works again after this run, he will have fulfilled his dream of starring on Broadway. That's tough to watch knowing how everything went down, and despite some positive attitudes, at times the cast have very real, very harsh things to say about the fact that talent doesn't always rise to the top. Even Jason Alexander has wistful thoughts about what might have been, yet I'm truly hoping his SEINFELD money gets him over that hump! BEST WORST THING has its share of problems. It's not particularly well made and often comes across as a puff piece. Both Sondheim and Prince graciously agreed to interviews and are seen developing the show in the archival footage. It's a treat alone to witness their creative process as they try to make the unique structure of the show work. Still, we never quite get a full understanding of why the two never worked together again. Sure, it may have been for financial reasons or embarrassment that things didn't go as planned, but nobody really wants to spill the dirt in this film. It also goes on too long, feeling much longer than its relatively brief 95 minute running time. Yet, I still cried as the movie kept moving backwards to that great, wide-eyed time where anything and everything could happen. The details here matter. When Prices talks about stopping at every crosswalk in New York City for fear of getting run over before the show opens, I could feel the buzz of excitement. For him, nothing was ever as important as this one, brief moment of glory. The fact that things went south, this film seems to want to say, doesn't matter as much as the fact that for a brief, shining moment, things simply WENT. This flawed, overlong documentary looks at the good and the bad, forcing a group of naive kids to grow up fast, and leaving the rest of us shattered but smiling.

Best Worst Thing That Ever Could Have Happened... Quotes