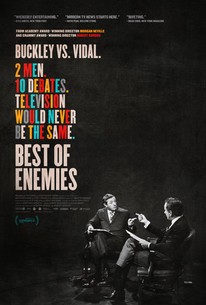 Critics Consensus: Smart, fascinating, and funny, Best of Enemies takes a penetrating -- and wildly entertaining -- look back at the dawn of pundit politics.

Critics Consensus: Smart, fascinating, and funny, Best of Enemies takes a penetrating -- and wildly entertaining -- look back at the dawn of pundit politics.

Critic Consensus: Smart, fascinating, and funny, Best of Enemies takes a penetrating -- and wildly entertaining -- look back at the dawn of pundit politics.

In the summer of 1968, television news changed forever. Dead last in the ratings, ABC hired two towering public intellectuals to debate each other during the Democratic and Republican national conventions. William F. Buckley, Jr. was a leading light of the new conservative movement. A Democrat and cousin to Jackie Onassis, Gore Vidal was a leftist novelist and polemicist. Armed with deep-seated distrust and enmity, Vidal and Buckley believed each other's political ideologies were dangerous for America. Like rounds in a heavyweight battle, they pummeled out policy and personal insult-cementing their opposing political positions. Their explosive exchanges devolved into vitriolic name-calling. It was unlike anything TV had ever broadcast, and all the more shocking because it was live and unscripted. Viewers were riveted. ABC News' ratings skyrocketed. And a new era in public discourse was born - a highbrow blood sport that marked the dawn of pundit television as we know it today. (C) Magnolia

News & Interviews for Best Of Enemies

View All Best Of Enemies News

Critic Reviews for Best Of Enemies

This doc about the 10-night series, directed by Robert Gordon and Morgan Neville (who won an Oscar last year for Twenty Feet From Stardom), provides an entertaining and, ultimately, depressing peek into TV at a pivotal moment.

A smart, engrossing documentary about a political and media moment in the United States in the 1960s; a moment whose resonance is topical and whose reverberations have been enduring.

Did anyone win? Most say Vidal, since Buckley descended to physical threats. But really, has anyone won in any of this endless bickering?

There is something about the siren call of the TV camera that can turn even big thinkers into brawlers. It was true then and it's true now, and "Best of Enemies" serves as a thoroughly enjoyable reminder.

For better or for worse, we'll never again see television quite like that documented in the compelling "Best of Enemies" ...

As entertaining as it is essential, Robert Gordon and Morgan Neville's film depicts the birth of punditry in real-time and shows how its all but drowning out non-biased, exhaustively sourced, good ole fashioned news media.

[A] fascinating look not only into this chapter of history but into the driving forces behind Buckley and Vidal and their disdain for each other.

There can't be a clearer sign of bad documentary filmmaking than reducing the most substantive part of your film to nothing more than an afterthought.

[Director Morgan] Neville and [Robert] Gordon have managed to make politics funny and interesting for the audience at large.

Let's thank the media gods this clash of the titans for the ages is being retold by two born entertainers. They have turned first-rate media-driven theater into a great time at the movies. It is, in a word, deeeee-licious.

An innocent young person might believe that, not so long ago, America was a latter-day Athens in which political arguments were magnificent in their purity and eloquence... For a useful antidote to this idea, I recommend Best of Enemies.

Audience Reviews for Best Of Enemies

I've previously seen and enjoyed the documentary Gore Vidal: The United States of Amnesia, which spends some time talking about this big rivalry and televised political debate. Here is a documentary released two years later that dives more deeply into that debate and give a little biography about both Buckley and Vidal. As the tagline on the poster says, "Buckley vs. Vidal. 2 men. 10 debates. Television would never be the same." The filmmakers suggest that this directly led to the televised coverage of American elections today and the level of commentary that often falls into personal attacks rather than focus on the issues/policy/truth.

An exciting analysis of the beginning of a major change in political journalism as it became a theater stage for egos, shown in this pivotal debate between two arrogant men who we can't deny were brilliant orators - even though I despise Buckley's political views and Vidal's aggressive ad hominem attacks.

With no televised debates between the presidential candidates in 1968, it was left to ABC who was desperately seeking an audience or any kind of attention really to make up for that by having Gore Vidal and William F. Buckley debate opposing viewpoints in the studio during the two political conventions that year. What the illuminating and snappy documentary "Best of Enemies" does well is provide behind the scenes information. The most surprising snippets involve fresh angles on the Chicago Democratic Convention which had already been so exhaustively covered and here go beyond just mentioning Gore Vidal, Arthur Miller and Paul Newman sharing a car.(I feel there should be a punchline there...) With a documentary just last year about Gore Vidal, the more revelatory parts in "Best of Enemies" involve William F. Buckley who in archival footage seems polite and eager to listen to different points of view on his television show, and at least until he is pushed too far in the debates with Vidal. At the same time, I do have certain bones to pick, not the least of which is the accusation that Vidal had ulterior motives for saying something unkind about Robert Kennedy. For Buckley, the documentary probably overstates his influence on the Republican Party when in fact he was might have just been in agreement with the more conservative Republicans in power.

Best of Enemies centers on ten televised debates in 1968 between William F. Buckley Jr. and Gore Vidal regarding the Republican National Convention in Miami Beach and the Democratic National Convention in Chicago. Most of the conversation is heated but diplomatic. The climax is fashioned around what is essentially an infamous altercation of name calling between these two loquacious rivals. The discussion centered on freedom of speech in regards to American protesters displaying a Viet Cong flag. Their polite discourse ultimately condensed to a hostile exchange. Gore Vidal baits Buckley with a personal low blow. Buckley strikes back in kind. Buckley and Vidal, these intellectuals with aristocratic bearing, had been reduced to children. According to the documentary, both had a hard time ever forgetting the incident. It was the seed that inspired an article in Esquire that led to a lengthy lawsuit that took years to settle. Individually, these debates had profoundly affected their lives, but more universally it changed the landscape of political punditry. Given the mostly civilized, highbrow rhetoric seen here and what we are now accustomed to, I'd say things have deteriorated considerably. fastfilmreviews.com