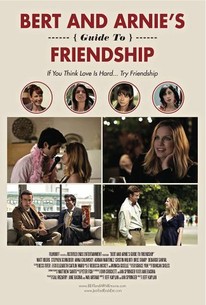 Critic Reviews for Bert and Arnie's Guide to Friendship

All this transpires in scenes that play more like skits, though some are pretty funny.

If you're watching this film and waiting for something funny or insightful to come along to assuage your annoyance, you'll wait a long time.

Enjoyment of Jeff Kaplan's film will vary given your capacity to simultaneously laugh and wink at the hijinks of two of the least palatable characters to share screen time in recent years.

Stephen Schneider's Arnie is that guy who says and does the wrong thing at almost every turn, and yet somehow is ridiculously successful at what he does...

The fact that Bert and Arnie has a few laughs, some nice performances and does not beat the viewer over the head with a slapstick-lead-pipe means it is a film worthy of respect.

There are no featured reviews for Bert and Arnie's Guide to Friendship at this time.