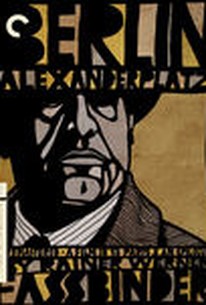 TV mini-series- Rainer Werner Fassbinder directed this 16-hour film that follows Franz Biberkopf (Gunter Lamprecht) after his release from prison in 1920s Germany. Although Biberkopf wants to remain straight, the poor economy ultimately drives him back to a life of petty crime and violence. Based on Alfred Doblin's acclaimed novel, this movie documents a man's descent into depravity and insanity, and sets the stage for the emergence of the Nazi party.

RT on DVD: The Return of Shrek, Miami Vice, and Seagal!

While the material is accessible, the style of presentation is pure Fassbinder: Rigid direction that reduces the actors to elements in the decor; sickeningly lush camerawork...

Thus, the film seems blowsy and distended, without the book's roller-coaster soarings and plummetings, without Franz's pain and Berlin's bleak desperation.

The work of a genuine master with nothing left to lose or hide.

All of the usual distancing effects drop out, leaving the wrenching spectacle of one man grappling with his life in perfect candor.

Every moment of the work here is enthralling and poignantly captured.

Highly stylized, it manages to combine theatricality with intimacy, which perfectly suits the tone of Döblin's narrative.

Exhausting and exhaustive, Berlin Alexanderplatz is an epic tale of brutality, betrayal and redemption.

If greatness is determined less by perfection than by sheer forward thrust, I can think of few better examples than Berlin Alexanderplatz.

Rainer Werner Fassbinder's fifteen-hour-plus adaptation of Alfred Döblin's novel, one of the most revered classics of German literature, is the German auteur's most lavish and complex production ever.

It's the crowning achievement for the prolific filmmaker Rainer Werner Fassbinder.

One of the greatest character studies imaginable.

The pièce de résistance of Fassbinder's career, an extraordinary 15-1/2 hour magnum opus that represents both the cinematic realization of his seminal inspiration and the culmination of his themes - and he properly departs from his detached style to deliver his most heartfelt and moving character study up to then, with a phenomenal central performance by Günter Lamprecht and a magnificent score by Peer Raben.

Mini-series,the artifact of a mad scientist.These monumental episodes by that uptight "scream" justified Alfred Döblin's modern classic,a statuette of ambrosia delving into the hearts and minds of spacious yet preconceived characters,apparitions of a crumbling institution,whether it's political or just unstable. Fassbinder's vision breathed through 14 chapters,line-ups of diagrams tracking down Franz Biberkopf (Günter Lamprecht),his alter ego/foe and friend Reinhold Hoffmann (Gottfried John),his ever longing confidante Eva (Hanna Schygulla) and his dear lover Mieze (the goddess named Barbara Sukowa) amongst countless of encounters,quarrels,processes till the expiation under the Berlin skies. "And if you ask again whether there is any justice in the world, you'll have to be satisfied with the reply: Not for the time being; at any rate, not up to this Friday." Alfred Döblin