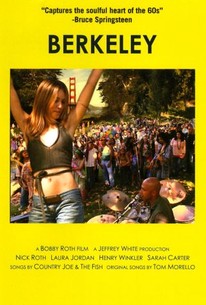 A young man is thrown into the center of the political and social tumult of the late '60s in this drama. It's 1968, and Ben Sweet (Nick Roth) is 18 years old and has just received his 1A draft classification. Ben does not want to go to Vietnam, and his father Sy (Henry Winkler) is understanding, though he believes Ben does have a responsibility to his country. As a compromise, Ben enrolls at the University of California in Berkeley, where he majors in economics but also hopes to indulge his interest in writing. Ben hasn't been in Berkeley long before his horizons are broadened by his childhood friend Mishkin (Sebastian Tillinger), who introduces him to marijuana and LSD, and Sadie (Laura Jordan), a classmate who takes him to bed for the first time. As Ben begins reconsidering the middle-class values he was raised with, he starts indulging his passion for playing guitar and joins a rock band with keyboard player Buddy (Wade Allain-Marcus) and drummer Blue (Tom Morello). Ben's political viewpoints also begin evolving when he meets campus radical Henry Wolf (Jake Newton), who believes a Marxist revolution is necessary in the United States -- and who steals Sadie away from him. On the rebound, Ben falls for Alice (Sarah Carter), the pretty blonde daughter of the college dean, but she bristles at his embrace of the counterculture as Ben becomes more deeply involved in music and politics. Ben's desire to write blossoms when he takes a class with Professor Hawkins (Bonnie Bedelia), a bohemian writing instructor who encourages him to explore his poetic side, but Ben's family are not entirely happy with the changes in his lifestyle. Nick Roth wrote and sang his own songs for Berkeley; he's also the son of director Bobby Roth.

Though "Berkeley" may be based on Bobby Roth's own experiences, he filters it through a narrative framework that feels distant and impersonal...

Only Henry Winkler as Ben's carpet-salesman pa has the joie de vivre the pic desperately needs.

Guess you had to be there.

A nice dose of secular Jewish wit and wisdom.

The whole thing does have an air of verisimilitude, but it's also just a little too blandly generic.

Roth's gift for unlocking the best in each of his actors does bring those long-ago times to life.

There are no featured reviews for Berkeley at this time.