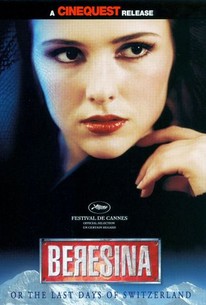 Irina is a Russian call girl who ends up in a land of fairy tales somewhere in the Alps. Her clientele are from the worlds of politics, business, the media, and the military. She trusts her affairs to a lawyer and his girlfriend. Her family in faraway Russia follows her social climb with interest. When she is forced to be an informer, Irina is lost in the labyrinth of different interest groups, but her blackmailers make sure that she has no choice except to spy on her clients. This results in some unpleasant anecdotes. She is threatened with expulsion. Acting on a misunderstanding and totally unaware of the consequences, she sets in motion a plan to overthrow the government. This plan was concocted many years ago by an obscure political organization called the Beresina Alarm. The fate of the country, as well as the heroine, takes an unexpected turn. Daniel Schmid successfully penetrates the psychology of his characters in this political thriller. 52nd Cannes Film Festival.

There are no critic reviews yet for Beresina oder Die letzten Tage der Schweiz. Keep checking Rotten Tomatoes for updates!

There are no featured reviews for Beresina oder Die letzten Tage der Schweiz at this time.