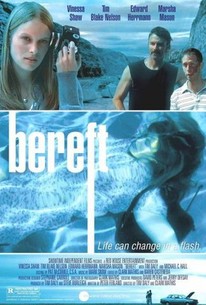 A woman has a hard time embracing reality after a personal tragedy in this made-for-cable drama. Molly (Vinessa Shaw) is a young widow having a hard time putting her life back together after her husband's death. Molly obsesses over the leftover artifacts of his life, and she believes that his spirit walks the house they used to share, though her attempts to photograph the ghost are a failure. Molly supports herself by working at a photo shop, where the manager (Amy Van Nostrand) is convinced Molly needs to remarry, and isn't shy about dropping hints. But Molly seems to have built an emotional wall around herself until she meets an uncouth neighbor (Tim Blake Nelson) who lives in the neighborhood with his uncle. While she doesn't think much of him at first, Molly in time makes friends with the man, and under his spell, she develops a daring and impulsive streak. Bereft was directed by Tim Daly, who also appears in a supporting role; the cast also includes Edward Herrmann and Marsha Mason.

Its conclusion is unsatisfying and probably undeserving for at least one of the characters leaving us wondering why we were grieving at all and was it worth it?

There are no featured audience reviews yet. Click the link below to see what others say about Bereft!