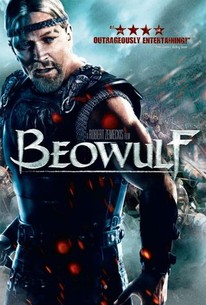 In a legendary time of heroes, the mighty warrior Beowulf battles the demon Grendel and incurs the hellish wrath of the beast's ruthlessly seductive mother. Their epic clash forges the timeless legend of Beowulf.

No doubt C.B. DeMille, another director with a knack for turning Hollywood stars into robots, would have been entranced.

Those who remember the 3000 line epic from 8th grade English will be pleasantly surprised to learn they've scrapped the original plot altogether.

An excellent showcase for the advantages of computer-generated animation.

I had a hell of a good time at this movie.

Their story arc brings some legitimate dramatic interest to Beowulf's climactic battle with the dragon.

The film strives for mythological depth and epic breadth, but it's hard to get below the flat, shallow gloss over every surface.

The characters up on screen seem like living, breathing people.

Expectedly, there are large-scale, edge-of-the seat clashes and some classic savage scenes. There are other interesting touches and some quirky emotions. It's a philosophical play on what it means to be a warrior.

Avary and Gaiman lay on the sexual innuendo and adultery, fleshing out the character of Beowulf into a believably unreliable narrator.

It's a superb action flick that will have you wide-eyed in awe at its effects; just don't go expecting any kind of literary discussion.

Beowulf is a well conceived and technically excellent rendition of the ancient legend, but it doesn't follow its ideas through all the way, and some strange choices on the part of Zemeckis ultimately make it a little less than the sum of its parts.

Beowulf is pretty to look at, but lacks soul. Perhaps it is time for Robert Zemeckis to return to the land of the living.

It's brilliantly presented with state-of-the-art CGI-animation and visual effects. Though many of its die-hard followers of the epic might not find this adaptation accurate, Beowulf is an entertaining blend of CGI with actual actors and daring action and drama. 4/5

A misshapen creature terrorises a Viking township leading to a bloodthirsty warrior answering the call of its ruler to slay the beast. Beowulf begins as you'd expect, with two dimensional Tolkien wannabes slapping each other's backs, bragging about their adventures and bouncing around the screen in computer generated blood baths. In fact, the heat of the battle featuring a naked Beowulf whose modesty is preserved by some laughably phallic scenery in a similar style to Austin Powers is almost comical, a comparison not helped by Angelina once again showcasing her Ivana Humpalot accent. The film only becomes remotely interesting once Grendel (almost incomprehensibly voiced by Crispin Glover) is disposed of; it is actually when the story shifts to the aftermath of the battle and the consequences of the secret bargain struck up by the relevant alpha males that the story by comic writing legend Neil Gaiman and Roger (Pulp Fiction) Avary comes to life. The visuals are very impressive as you'd expect, but computer generated imagery is only ever going to serve to remind you that you are watching a glorified Xbox cut scene despite some very attractive images. Strong voice acting by the central cast does help to draw you in however, and the tale concludes on just the right note. It's certainly a matter of taste as to whether you will enjoy the overblown swords and sorcery based spectacle, but Game Of Thrones fans in need of a politically themed hack and slasher fix will no doubt lap it up.