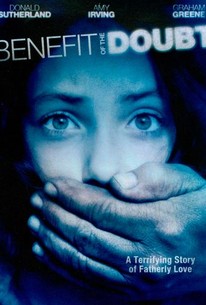 Benefit of the Doubt Photos

Karen, a life-weary single-mother and waitress finds her life disrupted when her father, Frank, is finally released after 20 years in the State Pen. It was she who provided the key testimony that had him convicted of murdering his wife. She still believes he did it, but is unable to remember the exact details of the traumatic event. This thriller chronicles the events that follow her father's return. First of all he begins ingratiating himself with her young son and her lover. Angered, she confronts him, but finds him too persuasively charming to stay angry. He then convinces her that her memory is faulty and that her mother died accidentally. She believes him and accepts him back. The tale takes a much darker turn, when her father begins isolating her from her friends and dominating her life. It is soon after she announces her intent to marry Peter that a new string of killings begin. Around that time certain events trigger Karen's dormant memories and she realizes that she knows the truth about her father.

Dustin Leighton
as Luke
View All

Critic Reviews for Benefit of the Doubt

Suspense is not the strongest suit of this predictable psychological thriller, which also fails as a TV style family drama, though Amy Irving, cast against type, is quite good.

There's hardly a moment in Benefit of the Doubt when we can believe the events on a psychological level, or even on the level of a manipulative thriller.

We're heading for another Cape Fear. Except we hit Cape Farce, as the film runs aground on some rocky dialogue.

There are no featured reviews for Benefit of the Doubt at this time.

Benefit of the Doubt Quotes