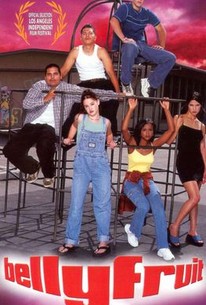 In this independent drama, three teenage girls find themselves dealing with that most adult of responsibilities, parenthood, when they unexpectedly become pregnant. Shanika (Tamara LaSeon Bass) was abandoned by her drug-addicted mother and has bounced from one foster home to another ever since. When she meets an older man, she's desperately looking for love, but has to settle for sex, and is unprepared for the consequences. Aracely (Tonatzin Mondragon) is forced out of her family's home when her parents discover she's having a baby. With nowhere else to go, she moves in with her boyfriend; however, he is barely able to provide for himself, let along help support Aracely and the baby. And Tina (Keely Vint) was herself the child of a teenage mother. Tina passes herself from one boyfriend to another; when she discovers she's pregnant, she realizes to her despair she not sure who the father is. Bellyfruit was shown as part of the 1999 Los Angeles Independent Film Festival.

Although the performances are astounding, the dialogue comes across as a little too stylized.

There are no featured reviews for Bellyfruit at this time.