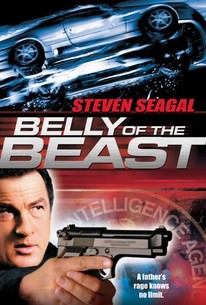 Belly of the Beast Photos

Ching Siu Tung directs the straight-to-video action thriller Belly of the Beast. Steven Seagal stars as ex-CIA agent Jake Hopper. He wants to retire peacefully, but is pulled back into the action when his daughter Jessica (Sarah Malakul Lane) is kidnapped by a terrorist group called Abu Karaf. While the rest of the CIA starts a routine investigation, Jake goes out on his own to find her. Seagal also co-wrote and co-produced.

Critic Reviews for Belly of the Beast

Shortt and Smiley do their best in two-dimensional roles, but this is a bits and pieces film, full of loose ends and stray plot lines insufficiently developed.

It's not just that Seagal makes awful movies; it's that he makes the exact same awful movies over and over. He's that annoying uncle who never stops borrowing money.

Audience Reviews for Belly of the Beast

Not one of Seagal's best movies, but not overly horrible either. The plot is typical Direct-To-DVD Seagal stuff and the acting is subpar, but then again Seagal is past his prime at this point.

Ok so its not exactly a shock is it. he's been making distinctly average films for years but this one takes it to another level.

Belly of the Beast Quotes