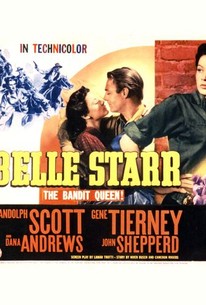 20th Century-Fox mixed together elements of its own Jesse James and Selznick's Gone with the Wind, and the resultant brew was Belle Starr. Looking precisely nothing like the real Belle, Gene Tierney plays the title role, whom the screenplay suggests was the daughter of a Southern aristocrat. When those Damn Yankees march in and appropriate Belle's land, she heads to Missouri and joins forces with a Confederate guerilla fighter (Randolph Scott). Belle marries the man, and together they become outlaws, hoping to avenge the fallen South. For reasons best known to the studio, Belle Starr is overloaded with offensive African American stereotypes, including the faithful old ex-slave (George Reed) who narrates the story.

Charles B. Middleton
as Carpetbagger

Franklin Farnum
as Barfly
View All

The questionable narrative is not all that's wrong with this production, as a miscast Gene Tierney is too delicate an actress to pass for a gunslinger.

There are no featured reviews for Belle Starr at this time.