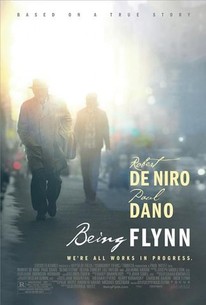 Critics Consensus: Robert De Niro gives a sincere, gripping performance, but Being Flynn is an uneasy mix of drama and comedy that fails to emotionally resonate as a whole.

Critics Consensus: Robert De Niro gives a sincere, gripping performance, but Being Flynn is an uneasy mix of drama and comedy that fails to emotionally resonate as a whole.

Critic Consensus: Robert De Niro gives a sincere, gripping performance, but Being Flynn is an uneasy mix of drama and comedy that fails to emotionally resonate as a whole.

Writer-director Paul Weitz turns his hand to this moving portrait of fathers and sons. Based on a true story, Being Flynn follows Nick Flynn (Paul Dano) who is shocked to have his eccentric and long-absent father, Jonathan (Robert De Niro) reach out to him unexpectedly. Still feeling the loss of his mother (played in flashbacks by Julianne Moore) in the midst of starting a new relationship with Denise (Olivia Thirlby), the last person Nick wants to see is his father. But you can't outrun fate and slowly Nick comes to realize he has been given the chance to make a real future not only for himself, but for his struggling father too. -- (C) Focus

Kevin Keels
as Banker at Party

News & Interviews for Being Flynn

View All Being Flynn News

Critic Reviews for Being Flynn

He might be guilty of showboating, but De Niro's knockout performance is a declaration that the star of "Raging Bull" isn't ready to hang up his gloves.

Weitz digs diligently for emotional truths and makes the most of his excellent cast.

I'm happy to report that De Niro hasn't lost his chops. At least not quite.

Heads downward in every sense of the word.

What's so satisfying about Weitz films like this one is how his lost boys and lost adults find themselves in the awkward dance of intimacy.

Being Flynn is being bored.

Being Flynn is unremittingly awful.

This is one of [Robetr] De Niro's finest performances.

I'm still not sure what this is all supposed to be about, save for a bunch of scenes that happened to somebody, sometime.

De Niro has succumbed to the false perception that 'great acting' is synonymous with screaming and yelling every line like your career depended on it.

Audience Reviews for Being Flynn

"First off, great cast. I really liked more then half of the actor's in this and I was really wanting to see this movie. The story is depressing. The father and son are very much alike. They are both writers, loners, and dependent on substances to help them deal with life. Things really start getting ugly when Jonathan starts staying at the homeless shelter his son, Nick works at. Nick is embarrassed of Jon and wants nothing to do with him and even pleads with him numerous of times to, please leave. But Jon seems to think since he created Nick he has a right to him. It's as dysfunctional as it gets in this father and son tale. I did enjoy the movie and the story being told. I really think Dano and De Niro did a fantastic job. All the acting was good. A solid film."

Based on his memoirs, this is the story of Nick Flynn- a burgeoning writer who is struggling to find his place in the world. His mother committed suicide, and he hasn't seen his wayward con of a father in 18 years. Nick takes a job at a homeless shelter to aid in his quest for meaning, and one day happens upon his father who becomes a quest at the shelter. From there the film shifts its focus back and forth between Nick and his dad, both trying to live their lives. It all sounds like this could have been a rather sentimental film, and, while there is a tad bit of that in there, it's mostly unglamorous, not very sentimental, and rather bittersweet and melancholy. and make something of themselves, and both struggling to deal with the past and their current realities and fractured relationship with one another. It's also rather disjointed and unsure of itself at times. I applaud writer/director Paul Weitz for trying his hand at some mildly challenging material, but it feels like he never finds steady ground or confidence with this material all that often. He does have some major cojones for having his film start out with De Niro driving a taxi into the mean streets of NYC, though. As interesting as the character of Jonathan Flynn is, the movie is supposed ot be Nick's story, with Jonathan as a major supporter. When the film is solely focused on Nick, it's great, but when Jonathan becomes the main focus, the film isn't as good, and feels all over the place. However, this is still a really good story, and it's a fascinating look into the world of homelessness. Some of the best material has to be when Nick explains the day to day operations of things at the shelter, and it very much reminded me of those moments from some of Scorsese's mob movies that detail the daily operations of the criminal underground. This film even has a decent amount of voiceover! Man, Weitz really does have a lot of guts! Anyways, this film might be flawed, but it's still pretty good. What ultimately saves it are the performances. Dano is quite believable as the conflicted and lost Nick, and this is another example of how he is one of the best actors of his generation. Olivia Thirlby is also quite strong as Nick's 'love interest', a fellow employee at the shelter with a troubled past of her own. It was also nice seeing Wes Studi again, perhaps the first new film I've seen him in since perhaps the 90s maybe. Julianne Moore is also pretty good in her limited but important role as Nick's mom. And what about De Niro? Well, this is probably one of, if not the best performance of his is about a decade or so. He's great at conveying the delusions and frustrations of the angry, bitter, and unhinged Jonathan. He kinda goes off the deep end a bit much here and there, and this is far from a career best for him, but it's miles better than the bulk of what he's done recently. All in all, I do recommend this. It's got its problems, and barely scrapes by, but it is entertaining, and has some great performances, so I think that's enough to warrant a watch.

"Being Flynn" succeeds at making some very interesting observations about the burdensome relationship between parent and offspring, but for a film that deals with some very heavy subject matter (including drugs, homelessness, insanity, and dysfunctional families), it feels oddly weightless, fleeting, and ultimately a missed opportunity.

I think it's fair to say that Robert DeNiro's film's over the last ten years or so have been pretty lacklustre. Regardless of this, I'm still that much of a fan that I will always venture into them anyway. If only, to see a glimmer of the great actor enjoying his work again. This might not be the return to form that I was looking for - at least in terms of end product - but it was in terms of his committed performance. Nick Flynn (Paul Dano) is a young man in his 20's who hasn't yet found his vocation in life. He is a budding writer but can't quite decide if he's talented enough and the lack of confidence in his abilities stems from the harsh judgement of his estranged father Jonathan (Robert DeNiro) who considers himself a great writer destined for success one day. Just to fill his time, Nick takes a job at a homeless shelter in Boston, where his father - now down-and-out - makes an appearance and looking to become a resident. It opens up all sorts of wounds for Nick as he now has to face up to his own demons and their dysfunctional relationship. The opening line of this film has DeNiro's character delivering a voiceover, informing us that "America has produced only three classic writers; Mark Twain, J.D. Salinger and me". The same could be said for DeNiro's acting abilities; he is considered one of America's classic actors and this is a welcome return to form from him. It's one of the best roles he has had in years and he really seems to be enjoying himself again, instead of just phoning in a performance. There are glimmers of the master here and although it's not quite up to his highest standards, he at least draws comparisons with his earlier iconic roles. With his vitriolic rants (as well as taxi driving) I couldn't help but envisage an older Travis Bickle or, more closely, an older and equally delusional Rupert Pupkin. Again, DeNiro delivers a finely balanced performance of a deeply flawed individual with delusions of grandeur. As good as he is though, the always reliable Paul Dano cannot be ignored either. This is the second time I've seen Dano play up against a masterful actor (the other being Daniel Day-Lewis in "There Will Be Blood") and come out looking very accomplished indeed. It's in the duality of these two characters that the film benefits from it's most original idea; having the double use of narration from them both. Each time either actor is onscreen they inform us of their take on life and the struggle that they have both faced in their estranged father/son relationship and how their lives will inevitably cross paths again. It's through this clever narrative device and two commanding performances that the film is elevated above the unsure handling of Paul Weitz' direction. The material is strong enough (based on Nick Flynn's actual memoirs) but Weitz struggles a little with it and seems unsure of how to balance the humour and the pathos. There are tragic moments that don't quite resonate as well as they should which could be a result of Weitz' past credentials mainly consisting of comedies. It's the actors that stand out here and in that respect Weitz at least deserves some credit in drawing two commanding deliveries as well as great use of music by "Badly Drawn Boy". This is a good film but had the potential to be better had it landed in the hands of a more experienced director. However, DeNiro chews up the screen like he once did in his prime and for that reason alone, this should be seen by his fervent followers.