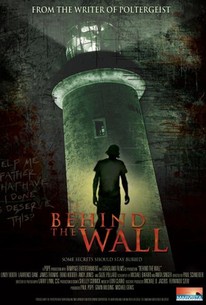 Twenty years after discovering her mother murdered in her family's lighthouse home, traumatized Katelyn returns to the scene of the crime to confront her worst fears. After her father was arrested and incarcerated for the murder, Katelyn fled town, vowing never to return. Now two decades have passed, and a development company is planning to renovate the lighthouse. Drawn back to her childhood home, Katelyn discovers that the developers have begun disappearing under mysterious circumstances. Later, Katelyn learns that her grandfather harbored a dark secret, and that the only way to end the nightmare that started with the death of her mother is to finally unearth the truth about her family's dark history.

Jody Richardson
as Herman
View All

Critic Reviews for Behind the Wall

There are no critic reviews yet for Behind the Wall. Keep checking Rotten Tomatoes for updates!

Audience Reviews for Behind the Wall

Behind the Wall Quotes