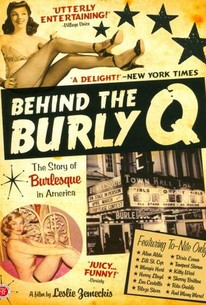 Behind The Burly Q Photos

Although its origins derive from France, Great Britain and Greece, burlesque became a wildly popularAmerican form of art that thrived in the early to mid part of the 20th century. Because of the sexualinnuendo and the barely-there costumes it has largely been left out of the history books.In the 1840s burlesque was applied to a wide range of comedic plays that entertained the lower and middleclasses in Great Britain. Coming to America, burlesque evolved into shows performed by scantily-cladbeauties. It thrived, appealing to the masses of working class people who weekly stormed the theatres tosee troupes like "The British Blondes", a bevy of beauties dressed in tights. Burlesque poked fun at theupper classes, at sex, and at what people were willing to do in the pursuit of obtaining sex. By the 1920sthe old burlesque circuits closed and strip tease was introduced to offer something vaudeville and film didnot.During the Great Depression, for a dime a man could fall into a big gaudy burlesque show and forget histroubles. From theatres to nightclubs, burlesque was a raucous sexy show filled with gorgeous women,strippers, comedians, acrobats and singers. The tame by today's standards, the shows were consideredrisqué, and most performers were looked down on as second rate.Backed by public outrage, in 1937 New York Mayor Fiorello La Guardia closed the burlesque houses in hisstate. The use of the word "burlesque" was outlawed in advertising. The Minsky brothers, who some sayintroduced nudity to the burly audiences, were so closely associated with burlesque that La Guardia bannedthe use of the name Minsky. Once again, burlesque changed, moving across the river to New Jersey toescape censure. Eventually comedians and musicians' parts were reduced in the shows and more stripperswere brought on. By the 1960s hard-core porn was available and burlesque had died. But what happened tothe thousands of performers? Where did they go?"Behind the Burly Q" is the behind-the-scenes stories of these men and women as told by the performersthemselves. For the first time ever, the performers from the golden age of burlesque relate theirheartbreaking, triumphant stories of life on the road performing in the burly circuit. Many were ashamed oftheir past and had never talked about their experiences. Just as many had never been asked.Director Leslie Zemeckis and producer Sheri Hellard traveled extensively across the country from theBayous of post-Katrina Mississippi, to New Jersey, Florida and all points between. The duo tracked downand recorded dozens of interviews with little-known performers to the last of the living legends ofburlesque. They spoke with relatives of many deceased stars. The men and women in this documentaryopened their scrapbooks as well as their hearts, relating memories they had all but forgotten.Amongst those interviewed were former musicians, strippers, novelty acts, club owners, funny men andwomen, authors and historians assembled together for the first time ever to tell you just what reallyhappened in a burlesque show. Sadly, many of the performers have since passed away, making this theirlast, and often times only interview. We dedicate this film to their memory."Behind the Burly Q" is the definitive history of burlesque during its heyday. Funny, shocking,unbelievable and heartbreaking, their stories will touch your hearts. Hear the performers in their ownwords. See the performers in action. We invite you to peek behind the curtain at the burly show. -- (C) First Run Features

News & Interviews for Behind The Burly Q

View All Behind The Burly Q News

Critic Reviews for Behind The Burly Q

Settles too easily for an editing formula which alternates talking heads, too cursory performance footage and montages of headlines and photographs.

More than a dozen of the burlesque performers featured here have died since they were interviewed in 2006, making Zemeckis's slapdash survey definitive by default.

Informative and fannish burlesque doc is shapeless compared to its curvy subjects.

Too scattershot to present a truly coherent picture of the burlesque experience, docu nevertheless provides a privileged front-row seat to sample several of the form's most memorable practitioners.

Many of the women who speak on camera, a number of whom have since died, were doing so for the first time, and their desire to set the record straight, or at least semistraight, is palpable.

It's great that she immortalized these women, some for the final time. But this is history as nostalgia.

This documentary from Leslie Zemeckis affectionately tells everything you ever wanted to know about the golden age of burlesque. The standout interviewee is Alan Alda.

Behind the Burly Q is a mess, but an enjoyable one.

At once amusing, raucous and poignant, Leslie Zemeckis' Behind the Burly Q is the most comprehensive documentary on burlesque ever made, smoothly incorporating rare vintage stills, interviews and footage.

A fun and affectionate look at a lost American pastime that continues to fascinate generations. Exhaustive research and respect for the subject practically puts the viewer within reach of the twirling tassels.

Although the subject might seem to be purely about titillation, burlesque is shown to have been a financially winning and socially indispensable form of entertainment in the days before televisions came into every family's living room.

Audience Reviews for Behind The Burly Q

Really interesting and really funny! It's awesome to see all of the old footage and pictures and hear from the people who were part of it.

Behind The Burly Q Quotes