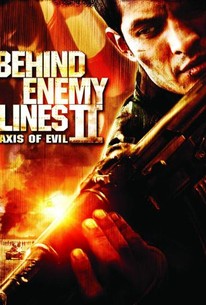 North Korea is threatening to flex its nuclear muscle, and it's up to a team of US Navy SEALs to prevent a catastrophe in this action-packed sequel to Behind Enemy Lines starring Bruce McGill, Keith David, and Peter Coyote. Everything was going as planned, but when the mission is aborted after the troops have already deployed, four American soldiers are forced to fight for their lives deep in enemy territory. As the rebel forces close in on the stranded men, the battle heats up and the fate of the free world hangs in the balance. ~ Jason Buchanan, Rovi

Critic Reviews for Behind Enemy Lines II: Axis of Evil

It's still reasonably entertaining if efficiently made action films are your bag, though.

Maybe the President and his cabinet should watch more movies, and perhaps they'll have a better handle on international politics.

A limp, cheesy B actioner gussied up with a semi-recognizable title.

Will offer a mild diversion to the action aficionadoes, but even those who like the flick will probably erase it from their memory banks in less than a week.

Audience Reviews for Behind Enemy Lines II: Axis of Evil

A stylish, solid and pulse-pounding edge of your seat action-packed thriller. It explodes with nail-biting suspense and non-stop action from beginning to end. A great set of characters that are motivated in a strong story oriented film. It's slickly well-crafted and strongly performed action flick. An adrenaline-pounding thrill-machine that dose not let up for a minute. A strong and exhilarating action movie

This straight-to-DVD sequel adrenaline-fueled adventure movie is average with the action scenes and flashing when the shocking or surprising thing happen; and the casting are so weak.

A low budget sequel to the quite enjoyable 2001 film starring Gene Hackman. The original is head and shoulders above this. I would watch that or Black Hawk Down again instead of this. Though there are quite a lot of familiar faces in this. Catch it if it's on TV.

Poor acting, pathetic direction, and nary a scene of excitement.