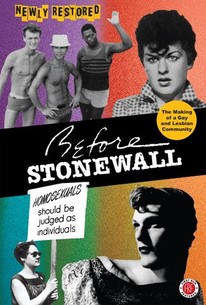 This documentary by Greta Schiller takes a look at the sometimes oblique American acknowledgment of homosexuals in the decades before a historical flashpoint in 1969. Late that year, the Stonewall Inn, a gay bar in Greenwich Village was stormed by police and its patrons arrested -- resulting in two days of rioting. Allen Ginsberg and other celebrities talk about past police tactics, witch-hunts, censorship, and historical "cleansing" operations that violated human rights and civil liberties -- such as routing gays and lesbians out of the State Department. A certain openness about sexual preferences started appearing in the 1920s and accelerated during World War II, eventually culminating in the organized movements of the 1960s and later demanding an end to discrimination. Older and younger generations of gays and lesbians present different viewpoints on a variety of topics, and conflicts or disagreements between gays and lesbians are outlined. The seriousness of the subject of discrimination is balanced with humor, which makes this documentary more accessible to straight audiences unfamiliar with the topic. ~ Eleanor Mannikka, Rovi

News & Interviews for Before Stonewall

View All Before Stonewall News

Critic Reviews for Before Stonewall

Join[s] Paris Is Burning (1990) and How to Survive a Plague (2012) in the top tier of documentaries concerning LGBTQ+ history and culture.

"Before Stonewall: The Making of a Gay and Lesbian Community..." remains a vital, well-told, if slightly rough-around-the-edges chronicle of LGBTQ history from the early 20th century to 1969's birth of the modern gay rights movement.

Its archival footage is extensive and the stories told by its talking heads are full of the sort of elder wisdom and poignant recollection that remains a potent testament 35 years later.

I do recommend the film, especially for straight viewers.

This is a documentary that can tell the sometimes bitter truth and still conclude with an unambiguously heartening flourish.

Before Stonewall stands as a competent documentary, straight-forward without any great cinematic techniques that stand out

Audience Reviews for Before Stonewall

I saw After Stonewall before seeing Before Stonewall. I don't think it particularly matters. Having this film created in the 80s allows us to get the words of many early activists who are unfortunately no longer with us. It paints what is thankfully becoming more of a sad period in history that has now passed.