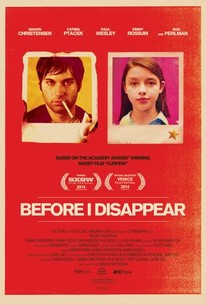 Before I Disappear Photos

A troubled young man and his straight-laced niece embark on a thrilling odyssey through New York City in this heartrending drama based on an Oscar-winning short. As his life hits rock bottom, 20-something Richie (Shawn Christensen) decides to end it all-only to have his half-hearted suicide attempt interrupted by an urgent request from his sister (Emmy Rossum) to babysit her precocious daughter (Fatima Ptacek). So begins a madcap tour of Manhattan after dark, as uncle and niece find unexpected bonds in the unlikeliest of places. Ron Perlman co-stars in this hugely moving adaptation of up-and-coming director/star Christensen's own 2013 Academy Award-winning short Curfew. (C) IFC Films

Joseph DeVito
as The Collector

Víctor Cruz
as Terry the Doorman

News & Interviews for Before I Disappear

View All Before I Disappear News

Critic Reviews for Before I Disappear

"Before I Disappear" would be a better movie if would-be triple-threat talent Shawn Christensen got out of his own way.

Before I Disappear is ultimately hampered not by a messy plot but by bland characters who, for the most part, don't so much talk to each other as they monologue at each other.

It has the unfortunate taste of something lean that's been plumped up with empty calories.

"Before I Disappear" wears its big, aching heart on its sleeve with a sincerity so unwavering that it's borderline goofy. And in a film about a burnout bonding with a cute kid, that lack of self-awareness proves critical.

Throughout the movie, you have the feeling of being dragged along on an impromptu journey by a filmmaker who is traveling without the benefit of a GPS device.

It's hard to take hectoring parent Emmy Rossum seriously, and there's too much troubling development tucked into a plot that already feels overextended. A surfeit of last-act explanations doesn't help either.

It's a tale that requires a strong, emotional component to be successful, and its glaring absence only becomes more and more apparent.

For all its dark humor and dire situations, Before I Disappear conveys that a little forgiveness and a little time with someone who cares can bring a little hope before it's too late.

This is a humorous, emotional and engrossing film.

The result of this is Before I Disappear, a darkly comic film about love and family with rich characters and an original voice.

Christensen, who not only stars but writes, produces, and directs, does about a dozen things simultaneously that most movies can't get right individually.

Christensen can't settle on a satisfactory tone-mawkish one moment, menacing the next... His movie is so vehement about Richie's redemption that even its bumpy detours are dully predictable.

Audience Reviews for Before I Disappear

Excellent. This is such an awesome film. It's heartbreaking, dark, hilarious, and inspiring, all at once. I love Before I Disappear.

The narrative is completely overwrought with unnecessary plot lines and loose ends, but triple-threat Shawn Christensen knows what points to hit hard and hit them hard he does.

Before I Disappear Quotes