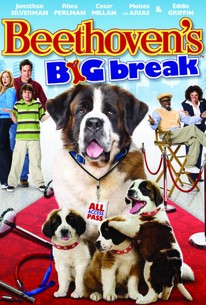 Jonathan Silverman, Oscar Nunez, Cesar Millan, Rhea Perlman, and Eddie Griffin headline this installment of the popular film series featuring everyone's favorite fun-loving St. Bernard. Animal handler Eddie (Silverman) may deal with some of the best beasts in the business by day, but when it comes to his personal life there are no pets allowed. So strict is Eddie in enforcing this policy that when his young son Billy discovers a stray dog named Beethoven and his young litter of puppies, he insists that the boy find another place for the homeless pooches to live. But when dog-nappers make off with the canine star of the latest film that Eddie is working on, producers start to turn up the pressure for Eddie to find a replacement. Now, the harried father's only hope is to replace the missing canine with Beethoven, a natural star if there ever was one. Of course it doesn't take long for Beethoven to win Eddie's heart, and take Hollywood by storm, in the process proving that you can teach an old dog new tricks after all.

Zach Kosnitzky
as Lewis
View All

offers plenty of slapstick moments and a fair share of burps and farts, which make the movie a sure-fire hit for young kids

There are no featured audience reviews yet. Click the link below to see what others say about Beethoven's Big Break!