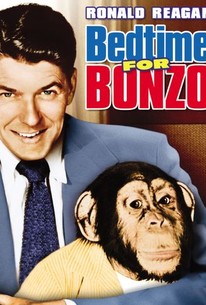 Forget what you've been led to believe: Bedtime for Bonzo is a most enjoyable film, and Ronald Reagan is not outacted by the chimpanzee. Reagan is cast as psychology professor whose reputation is sullied by the fact that his father was a convict. To prove that environment rather than heredity dictates a man's personality, Reagan uses Bonzo the chimp to test out his theories. The hairy little guy seems to be responding to the kindnesses lavished upon him--and then he is accused of robbery. Reagan nearly goes to jail in Bonzo's stead, but everything turns out all right in the end (we're not giving anything away; after all, everybody knows that there was a Bonzo Goes to College in 1952). While it's an uphill climb, Ronald Reagan and his able costars Diana Lynn and Walter Slezak manage to keep Bonzo from running away with the picture. And yes, director Fred DeCordova is the same guy who produced Johnny Carson's late-night show in the 1980s and 1990s.

Brad Browne
as Chief of Police

Bridget Carr
as Girl in car

Tommy Bond
as Student
View All

Critic Reviews for Bedtime for Bonzo

As is, it is a minor bit of fun yielding a respectable amount of laughs but nothing, actually, over which to wax ecstatic.

A dim sitcom of the kind Universal turned out by the dozens in the early 50s, distinguished -- if that's the word -- by the presence of Ronald Reagan.

For once Reagan is in synch with his costar, but Bonzo the chimp proved the more able farceur.

Its bland star, Ronald Reagan, survived playing second banana to a chimp to become the 40th President of the United States.

... you might be surprised to discover that the modest little comedy is actually an enjoyable piece of light entertainment.

Literally The Greatest Thing Ronald Reagan Ever Did.

The film is always enjoyable in spite of its shortcomings.

Audience Reviews for Bedtime for Bonzo

The Ronald Reagan classic, Bedtime for Bonzo is a wacky goofball comedy that's full of laughs. When Professor Peter Boyd's father-in-law to be objects to his heredity, Peter attempts to prove nurture trumps nature by raising a chimp named Bonzo to have good morals; and to assist him he hires a nanny to care for Bonzo as she would a child. Reagan gives a strong performance as a straight-man and Diana Lynn has a natural charm and charisma. But of course Bonzo has to carry the film, and you couldn't ask for a cuter, funnier chimp than Peggy (aka Bonzo). Most of the comedy relies on physical slapstick, and the writers come up with a number of wild and crazy antics for the chimp to get into (without seeming overly contrived). For what it is, Bedtime for Bonzo is incredibly entertaining and fun.