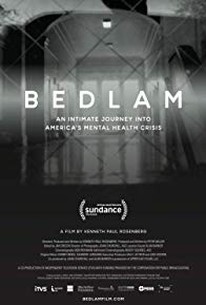 Haunted by the death of a mentally ill sister, psychiatrist Kenneth Rosenberg takes on the role of filmmaker to examine a national health crisis. Bedlam follows the poignant stories of people grappling with schizophrenia, bipolar disorder, and other chronic psychiatric conditions. Impossible to mask when untreated, their symptoms shove them into the path of police officers, ER doctors and nurses, lawyers, and prison guards. Shooting over the course of five years, Rosenberg takes us inside Los Angeles County's overwhelmed and vastly under-resourced psych ER, a nearby jail warehousing thousands of psychiatric patients, and the homes - and homeless encampments - of people suffering from severe mental illness, where silence and shame often worsen the suffering.

Bedlam describes the triggers pulled in the mid- and late 20th century to create this bedlam on a national scale. Massive federal defunding shuttered mental institutions across the country from the 1950s to the 1980s, leaving a skeletal support system in their place. Untold numbers of mentally ill people landed on the streets and, inevitably, stumbled on the cracks in American society that have led to misuse of jails, tens of thousands of people sleeping in parks and on sidewalks, and too many stories of loved ones lost while the clock ticks on solutions from policy makers and Big Pharma.

Bedlam is partially a wake-up call and partially a somber reminder of how much we've failed people over the last century.

A damning indictment and a call to action - lucid, harrowing and urgent.

Bedlam provides valuable context about how prisons have largely replaced asylums as facilities to care for people with mental illnesses. But the film's real strength is in Rosenberg's connection with his subjects.

The subjects unrelated to director Kenneth Paul Rosenberg allow him to show them in their most extreme, fragile states. This allows people to see what mental illness really looks like.

Bedlam isn't shy about how many errors we've made or how much work it will take to correct our course, but thanks to Rosenberg's care in crafting this documentary, you'll leave feeling more resolved for change than bogged down by defeat.

What Bedlam exposes is an utter lack of relief for any of us.

On an educational and activism front it hits all the right notes. As a movie, the documentary suffers from a poorly paced beginning but gets better and more engaging by the halfway mark.

There are no featured reviews for Bedlam at this time.