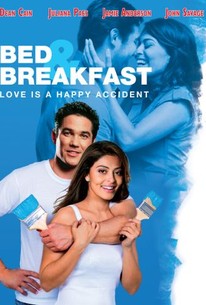 In this charming romantic comedy of errors, Jake Sullivan (Dean Cain, Out of Time, Futuresport, ABC's Lois and Clark: The New Adventures of Superman) - who recently inherited a small bed and breakfast in California wine country - is the almost ex-husband of movie star Amanda Cox (Kimberly Quinn, End Game). Unfortunately, while he still loves her, Amanda's on the way to town with divorce papers. In Rio, Ana Villanova (award-winning Brazilian actress Juliana Paes) is struggling to sort out her complicated life. Engaged to a beach bum, her loser half-brother is in trouble with the mob and her father dies leaving her liable for a mountain of debt. When Ana discovers the deed to now-valuable U.S. property among her father's effects, she's sure it's the answer to her dilemma. Only problem is - it's the same property Jake thinks he inherited. With a lawyer pal in tow posing as her husband (Julian Stone When in Rome, Eragone), the sultry urbanite arrives in the dusty country town of Webster to claim what's rightfully hers. Sparks soon fly - but a sour grapes dispute might just turn into a happy accident. Also starring Eric Roberts (The Expendables, The Dark Knight), John Savage (The Thin Red Line, The Deer Hunter), Julia Duffy (Intolerable Cruelty, CBS' Newhart) and Bill Engvall (Blue Collar Comedy Tour).

Daniel Ávila
as Paulo
View All

The plotting is lazy and the broad playing of the supporting characters tips them into caricature. Jake's Latina maid thinks Ana's mannered lawyer is 'light in the loafers'. But, no, he's not gay; he's just English.

There are no featured reviews for Bed & Breakfast at this time.