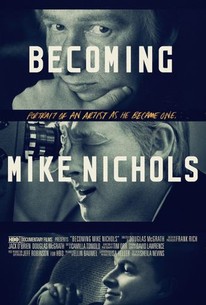 A compilation of discussions between director Mike Nichols (1931-2014) and his colleague Jack O'Brien includes the former's recollections of his early career in show business, including his comedy performances with Elaine May in the late 1950s; stage directions of "Barefoot in the Park" (1963) and "The Odd Couple" (1965); and making the films "Who's Afraid of Virginia Woolf?" (1966) and "The Graduate" (1967). The interviews were filmed at the Golden Theatre in New York City in July 2014.

It's not meant to be a complete catalog or chronology. It's a beautiful interview piece with archival photographs and clips that will inform any viewer's appreciation of the performing arts.

Every time [director Elaine] May cuts away from Mike Nichols talking, you're impatient for her to get back to him.

Becoming Mike Nichols will make you want to go back and rewatch Stevens's gorgeous and definitely American film, but only after you've paid a nice, long visit to Nichols's greatest hits.

"Becoming Mike Nichols" falls short of its potential beyond the clearly interesting source of trivia it provides ...

By concentrating on the early projects, we get a richer sense of the development of Nichols the artist in his own words and illustrated with photos and extended clips of performances.

For a documentary on his work to clock in at just 72 minutes doesn't seem fitting in any sense.

However, the film feels only half-baked ...[and] ultimately feels like a part one on a much larger work with sequels that never came to pass.

A short but sweet documentary on Mike Nichols.

There's always something a bit haunting in seeing a person so funny and smart and vibrant on film, knowing they would soon be gone.

There are no featured reviews for Becoming Mike Nichols at this time.