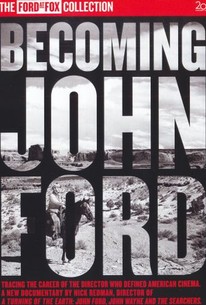 Academy Award-nominated filmmaker Nick Redman details director John Ford's remarkable stint at Twentieth Century Fox in an intimately detailed documentary that pays special attention to the relationship between the famed Grapes of Wrath director and studio head Darryl F. Zanuck. A master of the silent film who would go on to become a true legend of American cinema, Ford was just twenty-six years old when he took the helm for Just Pals (1920). Later, when Fox merged with 20th Century in 1935, Ford went to work with the notoriously strong-willed Zanuck. If there was any filmmaker who could give Zanuck a run for his money it was Ford, and it wasn't long before the director made history by earning back-to-back Oscars. Additional input from Ford biographer Joseph McBride, film historian Rudy Behlmer, and screen legend Peter Fonda (whose father Henry had a long-running professional relationship with the filmmaker) ensure that this is one of the most painstakingly assembled profiles of Ford ever committed to film.

There are no featured audience reviews yet. Click the link below to see what others say about Becoming John Ford!